School and university students at forefront of Lebanese protests 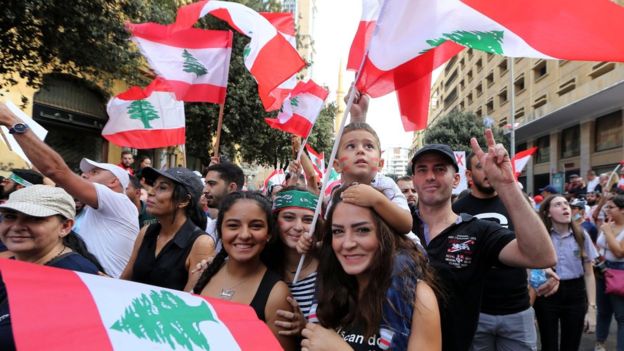 On Wednesday,  the students of schools and universities in Lebanon were the focus of the Lebanese event that has been burning for more than two weeks.

Hundreds of students staged a protests in front of schools, universities and the Ministry of Education and led anti-government demonstrations across Lebanon in defiance of the decision to resume classes on the 21st day of the popular movement against the ruling political class.

In the city of Jounieh north of Beirut, students gathered in the courtyard of the main public school in the area, joined by other demonstrators, to denounce the ban on the school administration to leave them and join the protest movements, according to local media.

Students , in Tyre (south) , closed the entrances to their official high school, demonstrating and chanting slogans calling for the overthrow of the Government .

In Beirut, dozens of students from schools and universities staged sit-in  in front of the headquarters of the Ministry of Education, expressing political and living demands like all the demonstrators in the country. "We are the essence of this revolution," a student among the protesters told a local media.,

In the cities of Nabatiye and Sidon in southern Lebanon, students of the Lebanese National University held a sit-in to express their rejection of their administration's decision to resume classes.

"We want a non-sectarian system," said one student with a loudspeaker as his classmates carried him on their shoulders, while holding a sign written on it"17 October Revolution" .

The same scene was repeated at other universities and schools in the capital and in the north of the country, where students moved to express their anger at the political class.

Hundreds of demonstrations were held in front of official institutions, such as EDL, a symbol of poor public services in a country that ranks 138 out of 180 on the corruption index, according to Transparency International - The Global Anti-Corruption Coalition.

Protesters also gathered in front of the Ministry of Finance and the Palace of Justice in Beirut, where lawyers demanded the independence of the judiciary, as well as the Central Bank to protest its monetary policies.

Protesters blocked the entrances to the car registration center in Dekwaneh, east of Beirut, to prevent employees from going to their works .

Last night, demonstrations from Beirut to Tripoli in the north and Sidon in the south were filled.

Since October 17, Lebanon has witnessed an unprecedented popular movement that erupted against the backdrop of living demands and evolved to demand the overthrow of the country's ruling class.

Under street pressure, Prime Minister Saad Hariri resigned on October 29, but the delay in forming a government has angered the protesters.