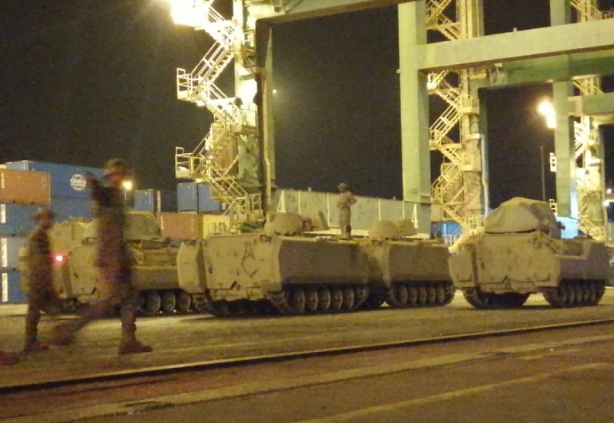 US equipment and weapons have clandestinely arrived in the Yemeni southern port city of Aden on a Saudi ship, CNN said Thursday.

The US network reported that it had obtained a footage showing "the distinctive shape of the US-made Oshkosh armored vehicle" as "deposited on the dock in the Yemeni port of Aden last week .. in the early morning darkness."

"This footage showing the unloading of a variety of US-made arms – which was filmed illicitly at the offloading site, then obtained and verified by CNN – is itself contentious.

On 29 October, local sources told Debriefer that "a great Saudi vessel arrived at the container terminal in Mualla district carrying hundreds of troops and officers and tens of modern armored vehicles and other military equipment."

"Multiple witnesses told CNN that Yemeni authorities, backed by the Saudi-led coalition, have been arresting and questioning those they suspect of leaking it to the media.

"Using whistleblower accounts and port documents CNN has identified the ship which offloaded the US weaponry in Aden last week as the Saudi-registered Bahri Hofuf.

"Looking at tracking data, the vessel's last recorded location was in the Saudi port of Jeddah on September 17, before it sailed to Port Sudan, arriving the following day," the network said.

According to CNN, the ship then turned off the tracking device, before appearing again in Aden on 29 October.

"Aden is controlled by the Saudi-led coalition in Yemen, whose main [unnamed] partners are continuing to ship American-made weapons into the country despite bipartisan outrage in Congress over the way the US is backing Riyadh in this bloody and bitter conflict," CNN added.

On October 27, the Arab coalition announced repositioning its troops in Aden as part of coordinating the military and security operations in Yemen.

Aden-based "coalition forces have been repositioned, so as to be under the Kingdom's command, and redeployed according to the ongoing processes' requirements," the coalition added.