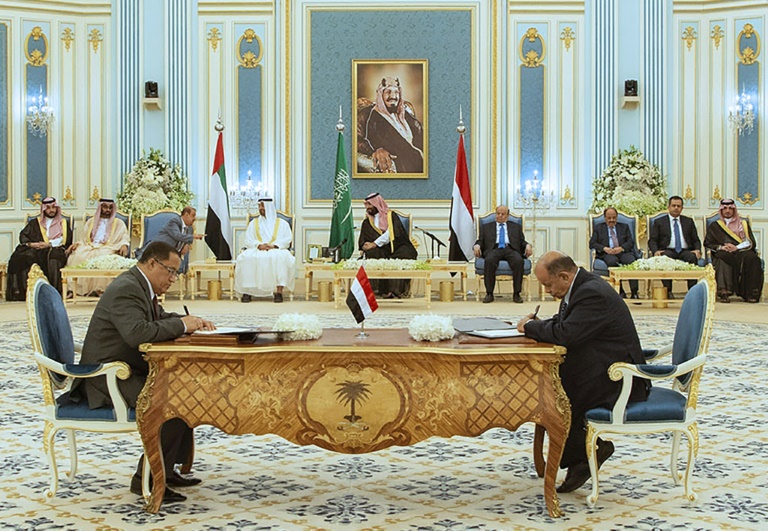 PM Maeen Abdulmalek was concerted by a brief ministerial team to resume work at offices of the government in areas under its control.

On 12 November, the premier is expected to resume work at his office in the port city and ministerial institutions in other liberated provinces, payment of salaries and other remunerations for military and security personnel and civil servants.

On 20 November, the Yemeni President would, on the basis of competence and honesty and following consultation, appoint Aden governor and security director.

All forces that have moved from their essential sites to Aden, Abyan and Shabwa since August 2019 would return to their previous sites along with all their personnel and weaponry and would be replaced by security forces under local authority in each governorate.

All medium and heavy weapons would be gathered from all military and security units in Aden and moved to Aden-based camps located and monitored by the coalition command.

On 5 December, a technocrat political government of no more than 24 ministers would be announced, with portfolios equally shared between southern and northern governorates, and occupied by persons who have not involved in any combating or provocative acts during events seen by Aden, Abyan and Shabwa.

Abyan and Dhalea governors would be appointed.

All the government military forces and STC military divisions would be redeployed from Aden into camps, located by the coalition command, outside Aden.

Police and Rescue forces in Aden would assume the responsibility for securing the governorate, steps would be taken to reorganize forces of the government and the STC as needed and according to the security plan, with their personnel selected on competence and professionalism basis, and would be trained, associated to the provincial security director and enlisted as security forces affiliated to the Interior Ministry.

Special and anti-terror forces in Aden would be reorganized, their new personnel would be selected from the forces of the government and the STC and be trained, and a commander would be appointed for them.

On 5 January, governors and security directors for other southern governorates would be appointed by the Yemeni President.

All the government military forces and STC military divisions would be united, enlisted, integrated into the Defense Ministry following appropriately-issued decrees and deployed in accordance with approved plans and under direct supervision from the coalition's command.

Military forces in Abyan and Lahj governorates would be reorganized under the Defense Ministry's command in the same way applied to those in Aden.

Security forces would be united, redeployed, and integrated into the Interior Ministry following appropriately-issued decrees.

On 5 February, military forces in other southern governorates would be reorganized under the Defense Ministry's command in the same way applied to those in Aden.

Institution Protection Force would assume the protection of all other civil and vital institutions in other liberated governorates, the seaports of Mukalla, Dhaba and Mocha and Belhaf facility.