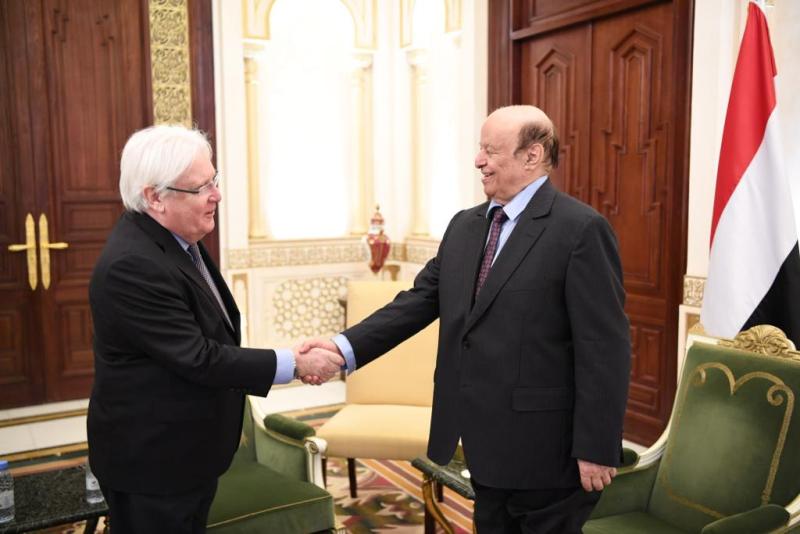 The UN envoy to Yemen said Tuesday he hoped to build on momentum following the Riyadh Agreement, between the Yemeni internationally-recognized government and the Emirati-backed Southern Transitional Council (STC), to resume the political process in Yemen.

The envoy met Tuesday with the Yemeni President Abd Rabbu Mansour Hadi in Riyadh and praised his leading role in reaching the deal with the STC, Martin Griffiths added.

"We agreed on the need to continue progress in all aspects of Stockholm Agreement to enhance confidence and create environment suitable for the political process," he tweeted.

The Yemeni President accused the Houthis of refusing to apply Stockholm pact and putting further difficulties in this context, the Riyadh-based Saba reported.

Hadi praised Griffiths' efforts and thoughtful attempts to make peace, break the stalemate and achieve as much as possible in this regard, particularly in terms of the pact signed with the group in Sweden.

The UN envoy for Yemen is seeking to launch all-inclusive negotiations between parties to the 4.5-year war next month or early next year, political sources said on November 3.

Parties to Yemen's war, after 8-day peace talks in Sweden, reached on the 13th of last December an agreement providing for ceasefire in Hodeida and redeployment of both sides' forces, exchanging prisoners and alleviating blockade imposed by Houthis on Taiz.