Time for a Reckoning in Yemen 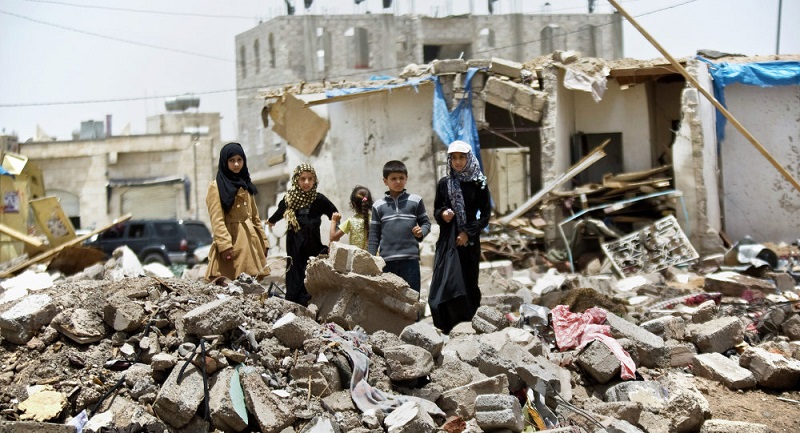 The United States should not be associated with forces who have shown no respect for the laws of armed conflict. Witness the three-year civil war in Yemen, which has already created the worst humanitarian crisis in the world. An estimated 3 million civilians have been driven from their homes and 8.4 million men, women and children are facing immediate famine.

Airstrikes by the Saudi-led coalition have recently intensified on the Yemeni port of Hodeidah and forces backed by the United Arab Emirates have advanced on the city. The lives of 250,000 civilians living there are endangered and, with the port under attack, the lifeline of food and medicine for Yemen’s entire population is at risk.

Americans are also at risk … of complicity in the crimes committed by coalition forces in that war.

The UN Security Council demanded a halt to the attack on Hodeidah and for the port to remain open for humanitarian assistance. So far, this call is not being heeded. It is essential that the U.S. Congress and the Trump administration take steps to prevent this crisis from becoming a catastrophe.

Three actions are imperative: First, cut the supply of arms that are being used to commit war crimes and widespread human rights violations. Second, demand that all parties, including the Saudi-led coalition, cease their assaults on civilians. Third, prioritize the investigation of war crimes so that those most responsible, in particular the commanders, can be held to account.

It is encouraging that a bipartisan group of House lawmakers has been pushing for the first two of these actions. They have asked Defense Secretary James Mattis to present Congress with immediate clarification as to the full scope of U.S. military involvement in the Yemen conflict.

They have specifically urged Mattis to use all tools at his command to dissuade the Saudi-led coalition from moving forward with the Hodeidah offensive, and to deny the provision of U.S. logistical, military and diplomatic support for any such operation.

The U.S. is selling weapons to Saudi Arabia and the UAE with little regard for the way they are being used. It is a simple, unarguable equation: When perpetrators have no arms and ammunition, civilians cannot be killed and maimed, and the rapidly spiraling humanitarian crisis can be forestalled.

From my own experience as an international prosecutor, I have seen how the provision of aid to proxy forces, which enable the commission of atrocities, can result in the conviction of those who knowingly furnish the assistance.

Instead, we need the U.S. to play a leadership role in ensuring that alleged war crimes are investigated and the direct perpetrators are prosecuted and punished.

In September 2017, the Dutch government proposed a resolution in the UN Human Rights Council (UNHRC) to establish a Commission of Inquiry to investigate serious violations and abuses in Yemen. The U.S. pushed for a compromise that resulted in the creation of a Commission of Eminent Experts on Yemen, which was only authorized to make findings as to “facts and circumstances.”

While the Trump administration has now withdrawn the U.S. from the UNHRC, it has pledged that the U.S. will “not retreat from its human rights commitments.”

It can demonstrate this commitment by supporting our allies in strengthening the mandate of the UN’s Yemen commission so that it can conduct a full investigation. In particular, like the South Sudan commission, it should be mandated “to gather and preserve evidence” and “make it available” for future prosecutions. This would signal to those who would target innocent civilians today that they could face a reckoning in court tomorrow.

The crimes being committed in Yemen are not limited to military attacks. It has been credibly alleged that many human rights supporters and journalists who have spoken out against the actions of parties to the conflict have disappeared or been arbitrarily detained, often in secret prisons, run by UAE forces and others. These abuses must be exposed and investigated in a manner that would lay the groundwork for future trials. They were highlighted and debated at a recent conference of high level experts hosted by the American Society of International Law and Washington Foreign Law Society at the Stimson Center in Washington, D.C.

The pervading view has been that serious violations and abuses against civilians can be committed in Yemen with impunity. This perception has been aided by the liberal provision of arms and assistance to the main actors by the U.S. and other governments. It has led to the world’s worst humanitarian crisis.

Because millions of human beings are at risk, decisive action is necessary. Refuse the warring parties weapons and end impunity for violations and abuses for the sake of Yemen’s future and the lives of untold civilians.