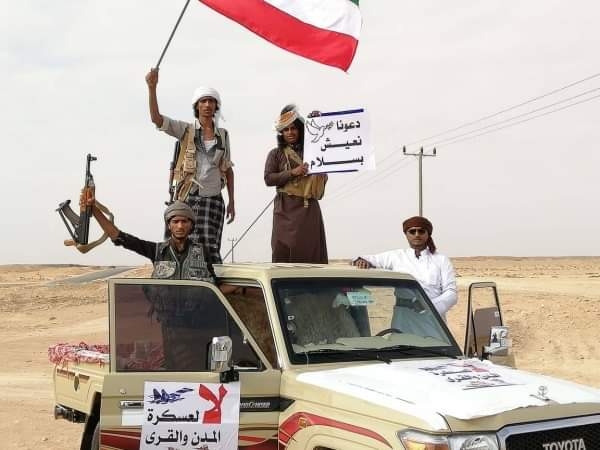 Peaceful protestors in the Yemeni eastern governorate of Mahara on Monday called the internationally-recognized President and government to "quit silence at the Saudi-Emirati occupation plotting to divide Yemen into infighting entities."

"The Saudi occupation and its militias have assaulted civilians and tribesmen of Shahin district" of Mahara, a committee for the protesters said in a statement.

The Saudi troops' presence in Mahara violates international laws, the statement read, calling on the governorate's tribes to unite and prevent rendering the Yemeni legitimate institutions into powerless.

The clashes erupted after the tribesmen had blocked the way before Saudi forces heading for the Shahin cross point at borders with Oman.

Saudi apache planes bombed the crossroads' nearby in a bid to reopen the road, but the armed tribesmen denied the Saudi armored vehicles access to the land port, local sources said.

On Sunday, the committee criticized the Saudi forces' measures at Shahin cross point as "arbitrary decisions against Yemeni travellers."

The measures "deny customs clearances for heavy equipment imported by citizens and prevent them from passing [through the port], and ask travellers to obtain new passports, though they have valid ones," said the committee in a statement.

"These measures are serious development unveiling the Saudi forces' arrogance against Yemeni people and harming Yemen's sovereignty as part of a policy meant to occupy the State's vital ports and institutions."

The committee will not stay helpless at these serious developments, it vowed.

"The Saudi provocation and obstruction of trade activity at Shahin port have pushed citizens to object this behavior and seek tribal protection," the committee's media officer said.

For the protest committee's chairman, the Saudi forces' violations have been too grave that "they interfere in people's life and living.

"While they argue they monitor the inflow of arms and drugs, none of these has come in throughout 4 years of their presence, which has rather harmed the people's life and interests," Amer Kalashat added.

This intense presence in the governorate means the Saudi are "occupation forces" that "intend to have full control of Mahara and lay their pipeline to the Arabian Sea."

"Our sit-in is peaceful. We don't oppose Saudi Arabia and local authorities if they carry out their mission declared to the legitimate government. But, at the same time, we cannot accept occupation and colonialism," Kalashat said.