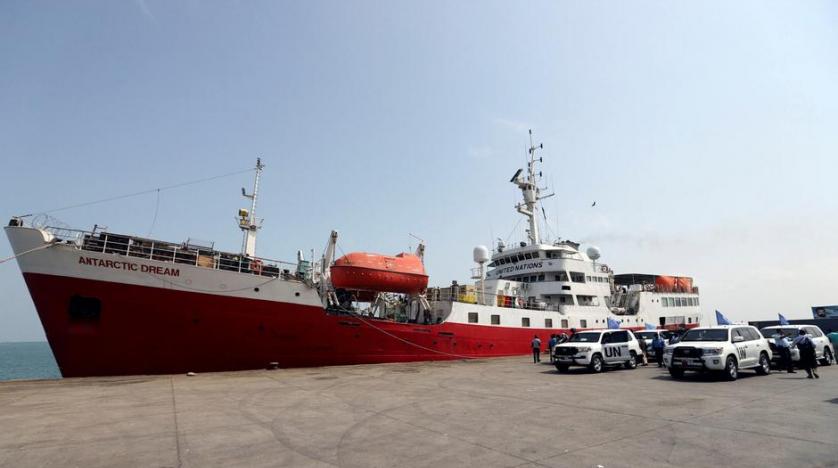 The Yemeni internationally recognized government called the Houthis (Ansar Allah) detention of a United Nations ship with government officers on board as part of "bullying methods", expressing its astonishment at the "international silence".

On Wednesday, the spokesman for the Yemeni "legitimate" government, Rajeh Badi, said that the Houthis had seized the ship in Al Hodeidah Governorate with liaison officers on the government team of the Redeployment Coordination Committee (RCC) and prevented them from leaving for the port of Mocha to deliver the officers according to the agreement with the UN mission.

He called on the United Nations to play its role in protecting the safety of the liaison officers and ensuring their return to Mocha urgently, according to the Aden-based Yemeni news agency "Saba".

He accused the Houthis of preventing joint meetings, closing the crossing points, preventing the entry of the United Nations Mission in Support of the Hodeidah Agreement into areas of government forces' control, and restricting its movement completely, as well as completely disrupting the Stockholm Agreement.

The government spokesman considered the detention of the ship a "dangerous and brutal development", warning that such detention would undermine the remaining hopes for implementing the Stockholm Agreement.

He regretted the inability of the head of the UN mission, Gen. Abhijit Guha, to force the Houthis to allow the ship to leave.

"Badi" attributed the government's acceptance of the joint team's work on the ship in the Red Sea to its endeavors to make the Stockholm Agreement succeed and spare the province of Hodeidah the horrors of war and destruction.

He said that the Houthi group had taken bullying and treachery methods, and endeavored with all its energy to thwart the agreement.

Victims' toll of Houthi shelling on a women’s prison in Taiz increase to 6, and 28 wounded

Attack on Saudi forces with an explosive device in Yemen's Aden