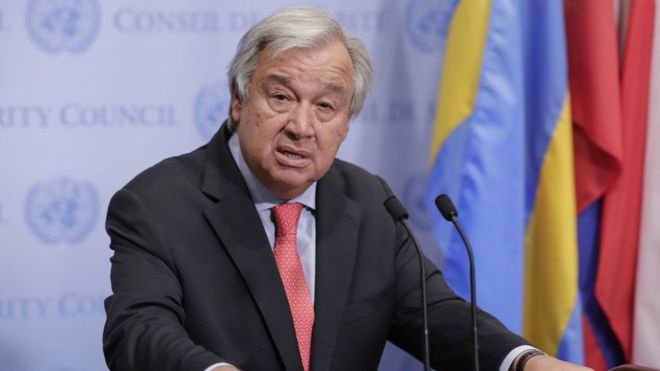 The UN Secretary-General on Thursday welcomed the Saudi-led coalition's announcement of a unilateral ceasefire in war-torn Yemen.
"I welcome the announcement by the Kingdom of Saudi Arabia, on behalf of the Coalition to Support Legitimacy in Yemen, of unilateral ceasefire in Yemen," Antonio Guterres said in a statement read by his spokesman Stephane Dujarric.
"This can help to advance efforts towards peace, as well as the country's response to the COVID-19 pandemic.
"I now call upon the Government of Yemen and Ansar Allah to follow through on their commitment to immediately cease hostilities. I also call on the Government and the Houthis to engage with each other, in good faith and without preconditions, in negotiations facilitated by my Special Envoy, Martin Griffiths.
"Only through dialogue will the parties be able to agree on a mechanism for sustaining a nationwide ceasefire, humanitarian and economic confidence-building measures to alleviate the suffering of the Yemeni people, and the resumption of the political process to reach a comprehensive settlement to end the conflict," Guterres said.
On Wednesday, the Saudi-led coalition announced a two-week inclusive ceasefire as of Thursday.
"This is renewable truce in support of the Yemeni government's decision to accept the UN Secretary-General's call for ceasefire" as part of preparations to counter ramifications of a coronavirus spread, the coalition spokesman, Turki al-Maliki, said in remarks carried by the Saudi Press Agency.