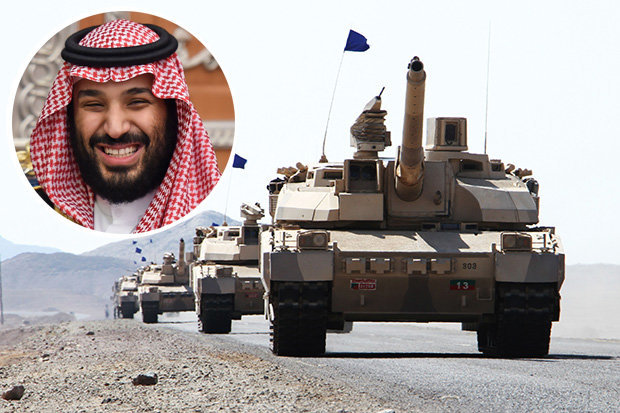 The excuse is Iran’s alleged support for the Houthis.

The rationalizer is Saudi Arabia.

The internal threat is both real and perceived socioeconomic change in Saudi Arabia.

The Saudi regime’s survival mechanism has been to transmute social anxiety into heightened hostility and project it onto Iran.

The result has been the mass bombing and starvation of Yemen. With Iran, there is no sure win, while destroying Yemen, the poorest country in the Middle East, would be a relative cakewalk.

Problem solved: Saudi social discontent, which may well have caused a revolution, found an outlet in Yemeni mass death, famine and disease. The House of Saud survives.

With oil revenue reductions, Saudi Crown Prince Muhammad bin Salman faced a dilemma: how to maintain exorbitant Saudi royal wealth and the House of Saud’s survival? In 2016, he came up with the what is known as Vision 2030 to modernize Saudi society, at least in appearances. The U.S. media, always seeking an excuse to celebrate Saudi Arabia, salivated. Salman outlaid a social reform agenda to make Saudi Arabia a haven for investment and multinationals, including replacing most foreign workers with Saudis.

Nevertheless, women driving is seen by ultraconservative mullahs and much of the population of Saudi Arabia (though not the elite, who compose most interviewees referenced in popular Western media) as a dangerous change. Talk of social reform has been ongoing since Salman became chair of the Saudi Council for Economic and Development Affairs and Defense Minister in January 2015. Early on, the question became how to pacify one of the world’s most socially conservative societies’ – where women are overseen by male guardianship – response to allowing women to drive, opening movie theaters, cajoling Saudis to work and eliminating much of the country’s extensive welfare system.

The answer was one of the oldest tricks in the book. Anger and social anxiety was redirected towards Iran. This would help ensure Saudi regime survival if American military welfare alone did not act as its guarantor.

While Saudi animosity towards Iran has increased since the overthrow of Saddam Hussein, Salman raised it to a whole new level. Not satisfied with a tentative peace agreement broached by warring Yemeni factions in March 2015, Saudi Arabia and allied Gulf States began pummeling regions under Houthi control. This occurred two short months after Salman became defense minister and a year before Saudi Vision 2030 was launched; but, indubitably Salman already had begun to devise ways to counter Saudi anxiety towards reform. As this was a momentous vision and change for Saudi Arabia, bin Salman likely realized early on that he needed a distraction and way to deflect social angst.

Tapping into Wahhabi hatred for Shias as apostates, the finger was pointed to Iran as the putative Houthi puppet master. However, more objective analysts highlight complete Houthi independence from Iran. Their relationship largely consisted of civilian transport and Iranian state media’s support for the Houthis. Evidence that Iranians have sent Houthis weapons is "thin;" even if Iran has tried to send arms, the Saudi blockade would prevent them from reaching the Houthis. Additionally, while both the Houthis and Iranians are adversely affected by US and Saudi policy, their branches within Shiism do not make them natural allies: Iranian "Twelvers do not even consider the Zaydi [Houthi] Fivers as Shi’a."

Saudi Arabia and Iran are regional rivals and Iran’s power has increased since 2003; thus, some Saudi concern of the ‘Shia crescent’ is merited. However, Saudi Arabia’s Yemeni intervention does not result from the fear of Iranian regional hegemony. It is to ensure the political survival of bin Salman and the House of Saud in the face of a potential revolt. Disenchantment of Saudi royal family members, after Salman expropriated 70% of the wealth from many of the detained 159 princes and Saudi officials in late 2017, only heightens Saudi Arabia’s need to double down on a perceived enemy.

Saudi Arabia’s three-year blockade of Yemen, exacerbated in 2017, has caused the world’s greatest humanitarian disaster since 1945, with mass famine and disease throughout Houthi regions. For this, Yemenis can thank bin Salman’s desire to remain in power and ensure the House of Saud survives during the country’s slow weaning off oil, sluggish social reform and privatization, each part of Vision 2030.

In the end, it’s Yemen that pays an unconscionable high price.

Certainly, it’s worth it to Salman and the House of Saud. But why should the international community put up with it?