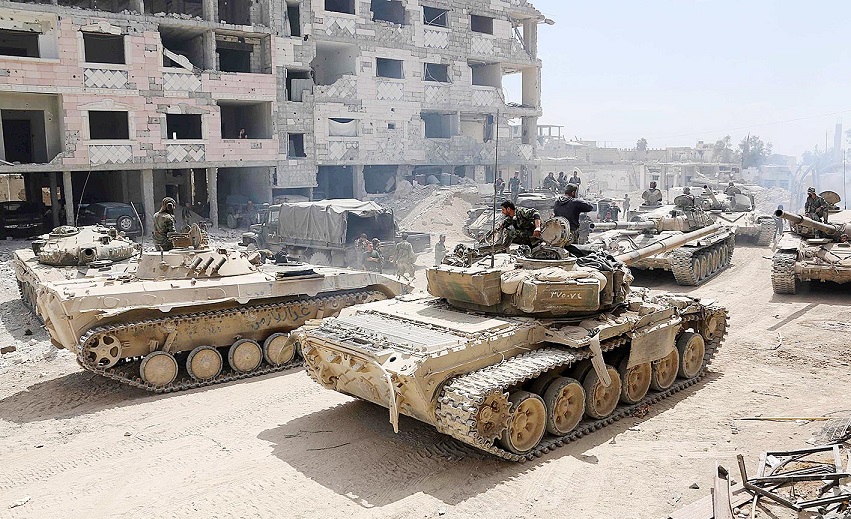 The Syrian government forces are sending reinforcements to the frontline with rebel-held areas in Idlib province in northwestern Syria as part of the preparations for a wide-scale offensive against that last major rebel stronghold in Syria, a war monitor reported on Thursday.

The rebels are also consolidating their positions in anticipation to a major military confrontation with the Syrian army in Idlib, according to the Syrian Observatory for Human Rights.

The Britain-based watchdog group said the indications are high that a major military operation is looming on the horizon after the army brought in hundreds of military vehicles, including armored ones, as well as thousands of soldiers from other frontlines.

Idlib has emerged as the main destination and stronghold for the rebels fleeing other parts of Syrian through deals or surrender.

In recent months, the Syrian army captured several towns in the southern countryside of Idlib and hundreds of people have started recently returning to those areas.

Several Turkey-backed rebel groups are located in that province near the Turkish border but the main powerful group is the Hayyat Tahrir al-Sham, or the Levant Liberation Committee (LLC), whose backbone is the al-Qaida-linked Nusra Front.

Abu Mohammed al-Golani, the head of the LLC, vowed in a video posted online recently that his group will fight in the face of any possible military offensive by the Syrian army.

He also noted that his group will not surrender similar to what happened in other Syrian areas where rebels surrendered their weapons and embarked on deals with the government.

For the Syrian government, the priority is to achieve reconciliation.

Bashar Jaafari, the Permanent Representative of the Syrian Arab Republic to the United Nations, said recently that the Syrian government is exerting efforts to encourage the local reconciliations in Idlib, otherwise, the Syrian army has the right to use force.

But the LLC has recently been rounding up opposition figures who are advocating the need to accept the reconciliation deals with the government.

The observatory said earlier that the LCC rounded up over 250 since early this month.

Additionally, Idlib is now living in a state of severe lawlessness amid assassinations, explosions, and infighting.

All of these factors could pave the way for the Syrian army to restore Idlib, after which the rebels would be left with some areas in the northern countryside of Aleppo province near Turkey.

But the situation is not that easy as the recapture of Idlib by the Syrian army demands an understanding between Russia and Turkey, which is the patron of several rebel groups there, and already has posts deployed there as Idlib is the fourth de-escalation zone agreed upon with Russia.

In his latest remarks, Jaafari said the Turkish side didn't live up to its commitment in the Astana talks about the de-escalation zones.

He said the Turkish side was supposed to send Turkish police with light weapons to the points agreed upon to observe the de-escalation of violence.

Instead, he continued, Ankara sent army forces with heavy weapons to Idlib.

Jaafari said the Syrian government has the right to restore all Syrian areas, stressing that the validity of the Astana agreement about the de-escalation zones is only six months and could only be renewed upon the consent of Damascus and its allies.

In addition to Turkey, Western powers have started warning Syria against chemical weapons as they feel the Idlib battle could be near.

The three Western powers stressed their "concern at the potential for further, and illegal, use of chemical weapons" in Syria.

"As we have demonstrated, we will respond appropriately to any further use of chemical weapons by the Syrian regime, which has had such devastating humanitarian consequences for the Syrian population," the three powers said in their statement.

Their remarks were read as a sort of threat to Damascus as the army is preparing to retake Idlib.

The Syrian Foreign Ministry on Wednesday condemned the tripartite statement, saying it's "the campaign of threats, hypocrisy, and misinformation resorted to by those powers against the Syrian Arab Republic, which comes in the framework of the outright support to the terrorist groups."

The ministry said that it had informed concerned International parties a few days ago about the information that the rebels are planning a fresh gas attack in Syria.

It said the Western statement comes to support any chemical attack by the rebels to use it as a pretext to attack Syria.

The three powers had launched a missile attack on Syrian military positions in April. At the time, they said they had targeted the facilities involved in the manufacture of chemical weapons in Syria.