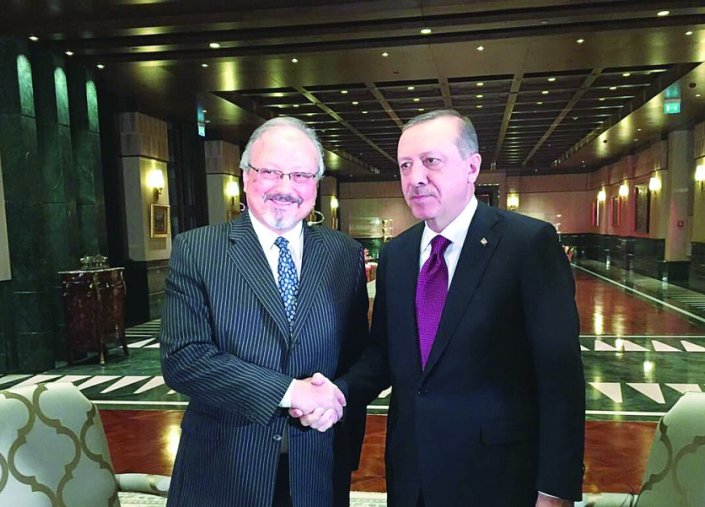 The real friend tells the bitter truth, goes an old Turkish proverb. In the wake of the disappearance of Saudi journalist Jamal Khashoggi on 2 October, a slew of bitter truths began circulating in US media as unnamed Turkish sources drip-fed details of a savage killing to journalists hungry for information about the crime of the decade.

The absence of hard facts in the early days paved the way for speculative theories, some outlandish, others rife with conspiratorial overtones. As lurid tales unfolded, there were echoes of Hitchcock’s Rear Window and the crime classic Scarface. The only available facts? Khashoggi walked into the Saudi consulate in Istanbul and did not come out.

Everything else was conjecture, hearsay and claims by anonymous sources. The media circus belied the inconvenient fact that there was a gag order on all Turkish officials while investigations were ongoing.

The most sensational reports, containing gruesome blow by blow accounts of Khashoggi’s murder, were attributed to unnamed Turkish sources who claimed to have heard an audio tape that the Turkish government has yet to confirm exists, weeks after the incident.

Curiously, none of the "revelations" came from Turkish media, as local journalists took a step back and allowed the US media to take the lead on this story.

The very first local media scoop was broken by Sabah, a Turkish daily newspaper, on 10 October, when it published the photographs and identities of the Saudi hit squad who entered the consulate. Up until then, the Turkish media was very quiet. Turkish newspaper Yeni Safak's sensationalist reports with gruesome details came days later, in mid-October. By then, the US papers had already been talking about dismemberment.

One likely reason for drip-feeding shocking "information" to the American press was to pressure the US government by swaying public opinion against Donald Trump’s bromance with Saudi Arabia’s Crown Prince Mohammed Bin Salman (MBS).

The anonymous sources for this information avoided the risk down the line of Turkey facing accusations from Saudi Arabia of having fuelled the media frenzy against MBS. Officially, the Turkish government was keeping silent. Who could control a few rogue officials slipping choice tidbits to the media?

Behind this gruesome drama lies the regional rivalry between Turkey and the Gulf powers, Saudi Arabia and the United Arab Emirates, that has grown steadily since the 2011 Arab uprisings and the Gulf-backed counter-revolutions that followed.

Arguably, the strategy worked. And the greatest revelation to emerge from the Khashoggi affair has been Turkey’s masterful exertion of soft power over a once formidable rival.

Former US ambassador to Azerbaijan, Matthew Bryza, says: "By leaking bits of detailed information by unnamed officials, the Turkish government… [was] developing leverage over the Saudi government while improving (or avoiding damage to) Turkey's reputation in Washington."

Indeed, if this carefully executed media strategy helped Ankara’s hand against Riyadh, some say it was also a convenient tool to pressure longtime Nato ally Washington in the run-up to the US mid-term elections.

An informed source said he had heard his Turkish contacts say that Khashoggi was brutally tortured, his fingers cut off, and then dismembered with a bone-saw while still alive. The source was not convinced, but the press went on to report this nonetheless. If Trump were perceived to be allowing MBS to get away with such a brutal murder, the hope was it would at least reflect badly on Republican candidates in the mid-term elections.

This strategy was a novel way of addressing Turkey's deteriorating relations with the US following the July 2016 failed coup and the negative western reaction to the thousands of arrests in Turkey over the last two years.

These tensions were heightened in the summer over the detention and trial of US pastor Andrew Brunson, with sanctions imposed on Turkey by the Trump administration in August.

In the wake of the Khashoggi murder, Brunson was freed on 12 October and the US sanctions lifted at the beginning of November.

The clearest manifestation of the return of Turkey’s soft power in the Middle East region can be traced back to 2007, when Turkey’s highly addictive soap operas began dubbing with the more accessible Syrian dialect rather than classical Arabic. Then came the Magnificent Century series in 2011, with a visionary sultan and harem intrigues.

For the public this was a clear sign of Turkey’s resurgent cultural and social influence over its former Arab dominions. Suddenly, traditional Ottoman bindalis (embroidered ceremonial coat) were in fashion and Ottoman-inspired jewellery could be found in shops in the Middle East and even Europe.

Turkish soaps have also successfully penetrated Netflix with an array of offerings. Dirilis: Ertugrul, an Ottoman-era drama, has garnered global attention, with even Venezuelan President Nicholas Maduro among its fans. Netflix now recommends Ertugrul: The Resurrection, as it’s called in English, as an alternative to Game of Thrones.

The streaming giant is also set to broadcast its first original Turkey-produced series later this year: The Protector. The show, which features a star-studded local cast, will follow a young man given mystical powers by a talisman as he fights dark forces seeking to destroy Istanbul.

Turkey has joined an elite league of countries able to export their history and culture via the film industry. And Turkish politicians are able to capitalise on this influence by using it as a tool in diplomacy.
The Turkish model

During the Arab Spring, Arab pundits referred to "the Turkish model" as the ideal shape their governments should take post-revolution. Ottomania was the word. Neo-Ottomanism entered common parlance.

Even in the century-old dispute with the Armenians over the events of 1915, Turkey put forth its arguments last year in a lavish epic film The Ottoman Lieutenant starring Hollywood A-list actors Ben Kingsley and Josh Hartnett.

A young Ottoman lieutenant, handsome and noble, is portrayed as sympathetic to the plight of Armenian villagers caught between Russian-aided Armenian rebels and rogue army soldiers. The film’s messaging was far more subtle, far more conciliatory than in previous years.

It appears that higher echelons of power in Turkey understand the shortcomings of presenting Ankara’s viewpoint in a 20th century manner, relying now on a style more modern, more Hollywood and more social media in its delivery.

In the past, politicians may have viewed international media with suspicion. But now, Ankara is demonstrating a keen understanding of the "power of smart power" in telling its story and influencing domestic and international opinion.