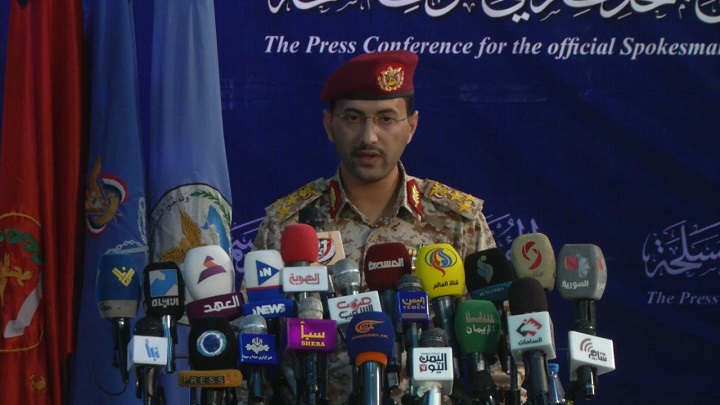 Yemen's Houthi group warned on Saturday to target the depth of both Saudi Arabia and United Arab Emirates and to strike Riyadh and Abu Dhabi, an indication of looming escalated military operations in the Arabian Peninsula impoverished country.

"The legitimate targets of our forces extend to the capital of Saudi regime and the emirate of Abu Dhabi," Houthi military spokesman Yahiya Saree told reporters in Sana'a.

"Our forces have aerial photographs and coordinates of scores of Saudi and Emirati headquarters, facilities and military vital bases," he added.

Saudi Arabia has been leading a military coalition in Yemen since 26 March 2015, in support of forces loyal to President Hadi to retake areas controlled by Houthi (Ansarullah) rebels seen as proxy for Iran in the Arab Peninsula country.

Houthi spokesman hailed his group's introduction of drone equipment into war as an asset that has enhanced "target bank" for their missiles. "300 military targets of the enemy have been added, including places used by Saudi and Emirati leaders, and can be targeted by suitable weapons once the leadership decides.

"Drone air force manufactory continues and is constantly improved. We have manufactured advanced generations of attack aircraft, and new systems will be used in the coming days."

He claimed the rebels "have strategic reserve of ballistic missiles, of which the group can now accurately fire dozens at the same time on more than one target of the enemy inside and outside Yemen."

The Iranian-backed rebels, throughout conflict, have fired ballistic missiles into Saudi border towns and also Riyadh, but recently they have more tended to use drones to target Saudi places, the latest was on March 8 when the coalition said four people had been injured by debris of Houthi unmanned aerial vehicle.

The internationally recognized Yemeni government and the Saudi-led coalition are accusing Iran of supplying the Houthis with weapons smuggled via regional waters, including ballistic missiles fired at Saudi Arabia, charge rejected by Iran and Houthis.

The coalition backing the official government has launched thousands of airstrikes on schools, markets and hospitals, leaving thousands of civilians killed.

In this regard, Saree said "more than 250,000 raids have been launched by coalition aircraft since war started ... using 5,914 cluster and phosphor bombs."

Houthi spokesman said the US had carried out more than 2,900 military flights, which he cited as clear evidence for US role in the war.

"During the past 4 years, more than 500,000 bombs and shells damaged some 700,000 public and private facilities and buildings" in Yemen, he claimed.

The conflict has triggered hard humanitarian conditions and the world's worst humanitarian crisis, according to the UN, while leaving most population in need for a type of humanitarian aid and immediate protection.