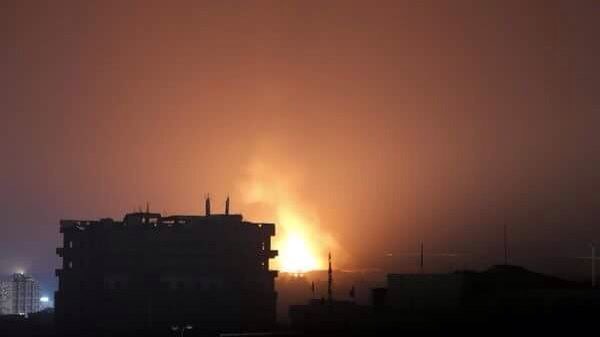 The Saudi-led Arab Coalition, backing legitimacy in Yemen, said on Wednesday it had carried out a "qualitative military operation, destroying two military targets" of the Houthis group (Ansar Allah) in Sana'a.

The coalition spokesperson Turki al-Maliki :"The command of the joint forces of the coalition carried out at (4:17) from dawn on Wednesday a qualitative military operation to destroy two military targets two military legal targets."

The Houthis, on the other hand, have transformed residential neighborhoods and civilian areas into military factories to booby-trap drones, manufacture mines, ballistic missiles and explosives and store weapons, he said, accusing the Houthis of using civilians as human shields in flagrant and blatant violation of International Humanitarian Law.

For its part, confirmed Houthi-run Al-Masirah TV in an breaking news on its website "a fire broke out in a plastic factory east of Al-Thawra stadium in the capital Sanaa after three Saudi-led Coalition air raids".

Al-Masirah added that the coalition warplanes launched air raid on the house of Mohammed al-Qodimi in the Bani Hawat area of Bani al-Harith, which led to a fire.

The parties to the conflict  traded accusations of responsibility for the blast that took place in the residential neighborhood of Sa'awan northeast of the capital Sana'a last Sunday.

As Houthis accused the coalition aircraft of targeting the residential neighborhood Sa'awan northeast of the capital Sana'a, denied the spokesman for the coalition, Colonel Turki al-Maliki, those allegations.

The incident was resulted from an explosion at Houthi bomb workshop, coalition spokesman Turki al-Maliki added, claiming that their warplanes had not targeted populated areas.

It has triggered what the UN calls the world's worst humanitarian crisis, with most of the population in need for a type of humanitarian aid and immediate protection, including 14 million people risking famine and some 1.8 million children suffering malnutrition.