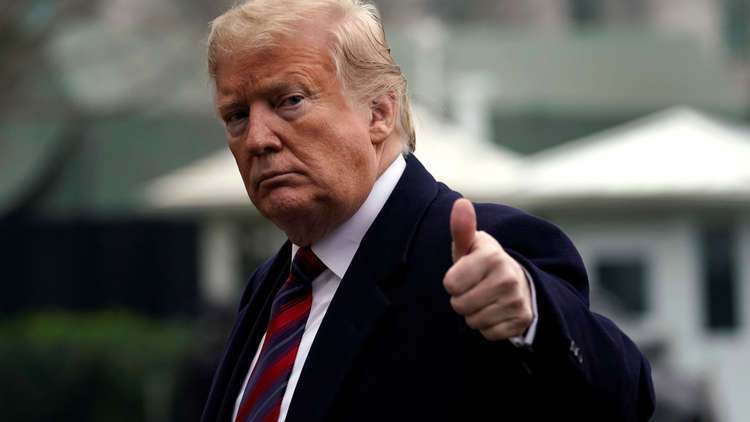 US President Donald Trump on Tuesday vetoed a resolution from Congress directing him to end US support for the Saudi-led war in Yemen.

Trump commended his step in statement saying: “This resolution is an unnecessary, dangerous attempt to weaken my constitutional authorities, endangering the lives of American citizens and brave service members, both today and in the future,” .

He added: "The support was necessary for a variety of reasons, “first and foremost” to “protect the safety of the more than 80,000 Americans who reside in certain coalition countries.”

He claimed that the resolution would “harm the foreign policy of the United States” and “harm our bilateral relationships.”

He pointed out that the resolution would “negatively affect our ongoing efforts to prevent civilian casualties and prevent the spread of terrorist organizations such as Al-Qaeda in the Arabian Peninsula and ISIS, and embolden Iran’s malign activities in Yemen,” Trump said, referring to two Sunni Muslim militant groups and his Shiite bete noire.

In the first response from the Saudi- led Arab coalition to Support Legitimacy in Yemen, the United Arab Emirates, the main partner of the Saudi-led coalition, welcomed the US veto on Congress's decision to end US involvement in the war.

Dr Anwar Gargash, UAE Minister of State for Foreign Affairs tweeted: "President Trump’s assertion of support to the Arab Coalition in Yemen is a positive signal of US resolve towards America’s allies. Common strategic interests are best served with this clear commitment,".

This is the second time that the US president has used the presidential veto since taking office. He used it earlier this year against a draft resolution suspending his declaration of emergency and building a wall along the southern border with Mexico.

The Republican-led Senate voted on March 14 Wednesday to end US support for the Saudi Arabian-led coalition's war in Yemen ongoing for four years.

Vetoing the measure is an “effective green light for the war strategy that has created the world’s worst humanitarian crisis to continue,” said International Rescue Committee president and CEO David Miliband.

“Yemen is at a breaking point with 10 million people on the brink of famine. There are as many as 100 civilian casualties per week, and Yemenis are more likely to be killed at home than in any other structure.”