Yemeni official warns of impact of migration on national security 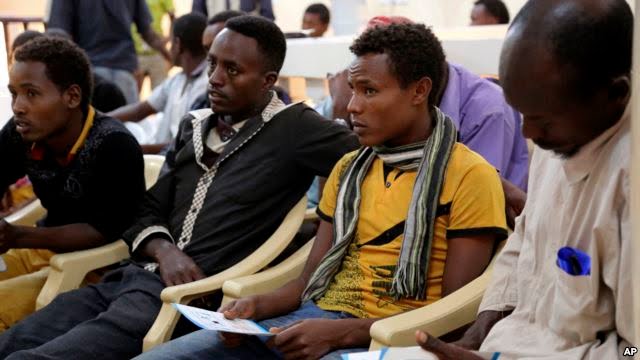 An official in the internationally recognised government of Yemen has warned of continued illegal migration from African horn countries to Yemen, citing impact of migration on national security.

Chief of the coast guard Brigadier Khalid Al-Qomali said: "The phenomenon of migration from horn African countries has become a serious threat to the national security of Yemen, especially amid an increase in the numbers of migrants arriving at the Yemeni coasts".

He highlighted the problem of exploiting migrants in smuggling drugs and arms from Africa into Yemen's neighbours and European countries.

Large numbers of migrants, mostly from Ethiopia, have arrived in the country through Balhaf coast in Shabwa, Omairah coast in Lahj and most recently through Abyan coasts on a daily basis, he said.

"Some of them travel on foot to Saudi borderds and then to Gulf states, and others travel through Yemeni province of Bayda to far northern regions to work in agriculture...".

Yet others have been smuggled through Lahj's coasts into the Sudanese island of Al-Zahrah, and then to Libya and Europe, he said.

Al-Qomali said the Houthi Group is using African migrants in road and barracde construction and battles.

"We warned of dangers of this phenomenon in May 2017 in a report we submitted to the Arab coalition command in Aden and the international coalition forces in Bahrain. We also submitted the report to a meeting of Yemen's friends in Riyadh and concerned UN offices," he said.

We also held meetings with the international organisation of migration and suggested building refugee centres at the Khour Omairah coast in Lahj so that we can register refugees, determine those who are eligible for asylum and deport those who are not, elaborated.

Al-Qomali called on President Abdrabbuh Mansur Hadi to empower and provide necessary support to the coast guard so that it can do its job.

Moreover, he called for coordination with the Saudi-led coalition in order to stop the establishment of and support to non-state refugee units, build a refugee centre at the Bir Ali coast in Shabwa and contact the Ethiopian embassy to help address the issue.

Migrants and asylum seekers from horn African countries, mostly from Ethiopia and Somalia, have continued to arrive in Yemen, which have been devastated by a five-year armed conflict.

In March, the UN revealed that 150.000 African refugees and migrants arrived in the country in 2018, 90% of whom came from Ethiopia.

Yemen is hosting around 280.000 African refugees and migrants, according to UN data.