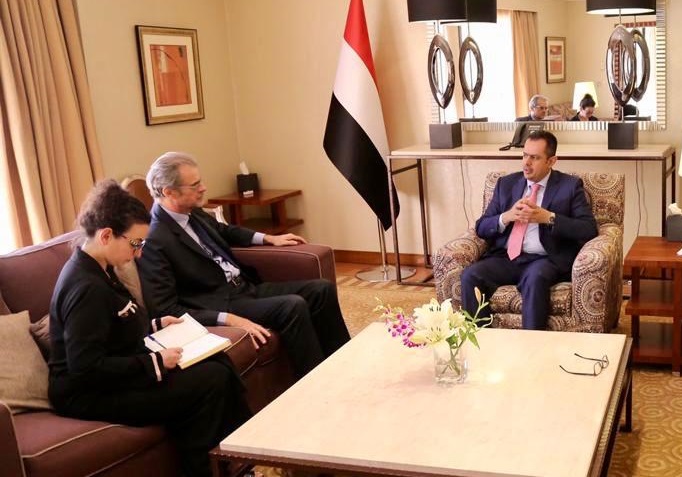 The Prime Minister of the Yemen's internationally-recognized government Dr. Maeen Abdulmalik, on Thursday, accused the Houthis group (Ansar Allah) of foiling the Amman talks to resolve economic problems between the two sides of the conflict in Yemen, which has been waging a bloody war for the fifth consecutive year.

Abdulmalek said during his meeting in the Saudi capital Riyadh with French Ambassador to Yemen Christian Testu that his government "will not tolerate the Houthi attempts to push the national economy towards collapse without taking into account the catastrophic human suffering caused by its war against the Yemeni people since its coup against the legitimate authority."

He stressed that his government will continue to "implement the measures taken to dry the sources of financing the war of the Houthis on the Yemeni people, including shipments of Iranian oil and others,".

The head of the government of "legitimacy" accused the Houthis of deliberately foiling Amman's consultations in mid-May on economic aspects and their determination to continue to cause more human suffering for the Yemenis and deal with them intransigently and reject all opportunities for peace and political solution.

The Houthis meet the concessions of "legitimate" government by "intransigence and rejection under the guidance of their supporters in Iran, which was and remains a fundamental cause in all this destruction and devastation in Yemen.", he said.

On 16 Mai, meetings between Yemeni rivals on Hodeida economic issue have failed to conclude in a deal, informed sources told "Debriefer" news agency, after three days of UN-sponsored discussions in the Jordanian capital, Amman.

Neither the government nor the Houthi negotiators has been prepared to make concessions, sources added. "This was the main cause behind failure of the talks," which were attended by the UN Envoy Martin Griffiths.

"While the government team insisted that all revenues of Hodeida and its ports be deposited into Hodeida branch of the Aden-based Central Bank of Yemen (CBY), Houthi team clang to the larger portion of the returns be transferred to the Sana'a-based CBY," said the sources.