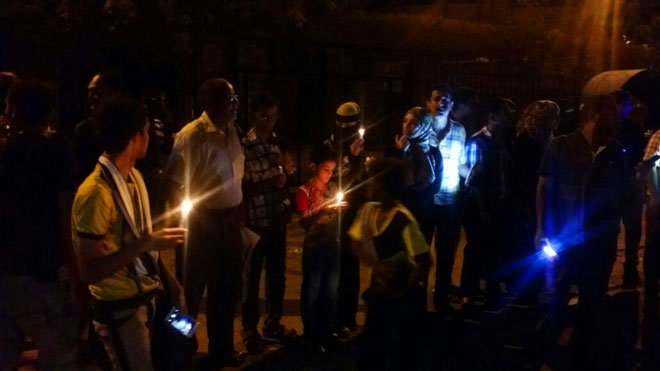 Soldiers loyal to the Saudi-led coalition in Yemen on Sunday fully cut the power in the port city of Aden, seat of the internationally-recognized government, in protest of delayed payment of monthly salaries.

"Soldiers opened fire at the main power lines in Boraiqa district, to the west of Aden, leaving the main power plant out of service," said Debriefer correspondent.

The soldiers are under leadership of the Salafist Brigadier General Hashim Assayed, leader in the 'Southern Resistance', added the reporter. "They left one of the camps (under supervision of the Arab coalition in Yemen) to block a main road and open fire at electricity lines."

"We found the names of some colleagues had been omitted from payrolls, increasing our resentment," Debriefer reporter quoted some protestors as saying, noting that Aden was still in blackout.

The Aden-based ministry of electricity said Sunday the provincial grid went out of service at 7:30 (local time), following a technical problem.

Since its liberation from Houthis in July 2015, Aden has been suffering destabilized security and vast spread of arms, leading to surge in violence and influence of armed men and extremist groups, like Qaida and ISIS.

Yemen has been racked by a 4-year bloody conflict between the internationally recognized Yemeni government's forces, backed by a Saudi-led coalition, and the Iranian-backed Houthi rebels who ousted the government.

The UAE formed, trained and equipped many Yemeni military and security divisions in the south of Yemen to fight Houthis but also al-Qaeda that exploited civil war to expand its influence in the south, although the gulf state claims the group was forced out.