Where Did America's Refugees Come From In 2018?- Infographic 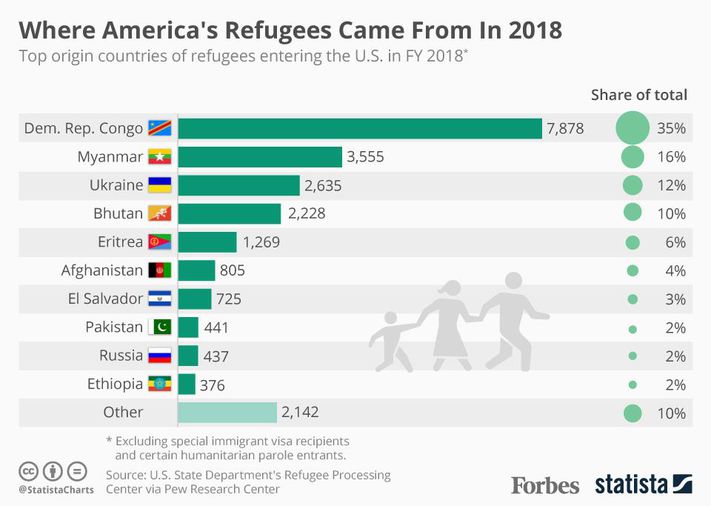 The federal Refugee Resettlement Program was created in 1980 and since then, the United States has welcomd more than three million refugees from all over the world. In recent years, however, intake has fallen dramatically with the Trump administration limiting the total number of refugees allowed into the country annually to 30,000. That change in policy has had the greatest impact on Muslim-majority countries where admissions fell by 90% between 2017 and 2018, according to the International Refugee Assistance Project. Syrian refugees, the largest population of refugees seeking resettlement, have been among those hardest hit. In 2016, 12,587 refugees were allowed into the U.S. and in fiscal year 2018, just 62 were allowed in.

Considering Trump’s tough stance on refugees, especially those from Muslim-majority nations, where did America’s refugees come from in 2018? The Pew Research Center recently published an analysis of data from the U.S. State Department’s Refugees Processing Center which highlighted the top origin countries in FY 2018. The Democratic Republic of the Congo accounted for 35% of total refugee intake – 7,878 people in total. Myanmar came second with 16% (3,555) while Ukraine came third with 12% (2,635). In FY 2018, the U.S. resettled 22,491 refugees compared to 84,994 in FY 2016. Out of those resettled last year, 3,495 were Muslim (16%) and 16,018 were Christian (71%).