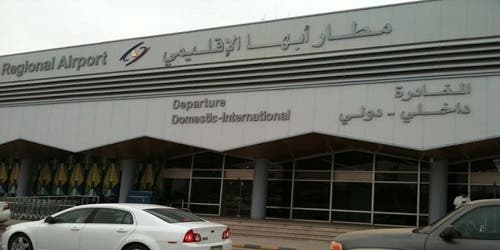 The Houthis group (Ansar Allah) in Yemen said on Wednesday it targeted the Abha airport in southwest Saudi Arabia with a ballistic missile.

The Houthi-run Al-Masirah TV reported that the Houthi group missile force  strikes Abha Airport with cruise missile and confirms a direct and accurate hit of target halt of all flights.

The spokesman for the Arab Coalition Forces, Colonel Turki al-Maliki said that

at 02:21 hours on Wednesday morning, Houthi fell on the arrival lounge at Abha International Airport, where thousands of civilian passengers and citizens of different nationalities pass daily.

Turki al-Mailki said in a statement that eight of those wounded at Abha airport were admitted to hospitall and 18 cases were treated at the scene were minor injuries. He added that the injured are of different nationalities, among them three women who are Yemeni, Saudi and Indian, and two Saudi children.

The arrivals hall was also damaged, he stressed.

A spokesman for the coalition forces said that the Houthi group claiming full responsibility for this terrorist act constitutes "a clear and full recognition of the responsibility of targeting civilian and civilian objects that are subject to special protection under international humanitarian law".

He added that the Houthis' practical adoption of the cruise missile "also proves that these terrorist militias have obtained new qualitative weapons, that the Iranian regime continues to support and practice cross-border terrorism and continues to violate relevant Security Council resolutions, including resolution 2216 and resolution 2231."

Al- Maliki confirmed that the Joint Forces Command of the coalition "will take urgent and immediate measures to deter these terrorist militias and will hold accountable the terrorist elements responsible for planning and implementation of this terrorist attack."

For his part, spokesman for the forces of the Houthi group(Ansar Allah) Brigadier Yahya Saree that the cruise missile, which was fired today at the airport Abha targeted the control tower and hit the target with high accuracy, which led to the disruption of air navigation at the airport.

According to Brigadier Sare’e the Houthi-run Al-Masirah TV reported that the winged rocket hit the control tower of the airport directly, causing its destruction and succeeded in making it out of service”.

He further confirmed that the missile could not be discovered by the US radar systems and the missile attack caused great confusion in ranks of enemy.

The official spokesman for the group of Houthis Mohammed Abdulsalam in a tweet on Twitter on Wednesday, seen by Debriefer news agency: "The continuation of the aggression and the siege on Yemen for the fifth year, the closure of Sana'a airport, the rejection of political solution and the peaceful option makes it imperative for the Yemeni people to defend himself."

Houthi forces on Tuesday warned Saudi Arabia and the United Arab Emirates, which are leading a military alliance to shore up legitimacy in Yemen, "with great surprises" if their military operations are not stopped and called on civilians to stay away from the military and vital goals of the two countries.

The Houthi-run Al-Masirah TV quoted Houthi group army` spokesman, group Brigadier General Yahya Saree,  as saying: "We advise the Saudi and UAE regimes to stop the aggression unless we have great surprises and pressure and the coming days will reveal to them."

He added: "We are able, thanks to God, to perform more than one operation at the same time according to the options available and in the time and time we define."

A spokesman for the Houthi forces that the bank aims to expand day by day, calling on civilians in Saudi Arabia and the UAE to "move away from all military objectives and vitality as they became legitimate targets."

The military spokesman of the Houthi stressed  that "after the process of the ninth of Ramadan is not as before", and that "the aggression have to calculate that,". He refers to the attacks launched by the forces of his group on 14 May last, corresponding to the ninth of Ramadan with seven drones and targeted Saudi oil facilities in Riyadh.

Mid-May, Houthis claim their forces hit Saudi targets, including two oil pumping stations near Riyadh, with the rebels saying they are in retaliation to coalition strikes on its forces and civilian targets in Yemen.

Houthis sporadically fire ballistic missiles and UAVs on Saudi territory "in reply to coalition airstrikes that target Yemeni civilians and infrastructure," while Saudi Arabia accuses Iran of providing Houthis with such missiles.

Houthis said they have a bank of 300 vital targets in Saudi Arabia and United Arab Emirates.