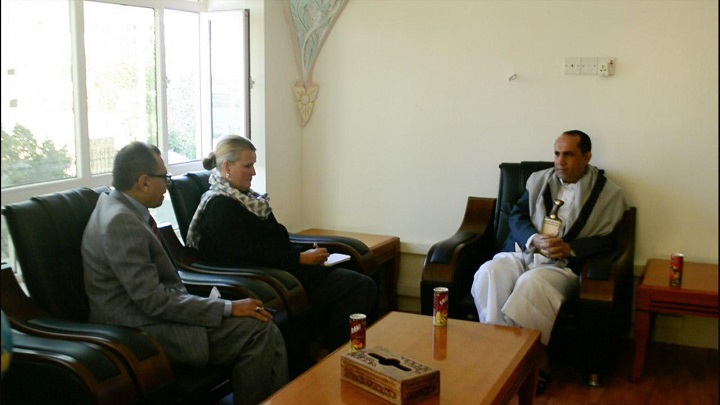 The Houthi rebels have accused international groups of using humanitarian work as a means pressure and benefit politically, and stressed on their refusal of adopting a biometric system to identify people most need aid in a country on the brink of famine.

"The goal of humanitarian work is to provide service to people, but not to exert pressure and gather data," the Sana'a-based Saba quoted Ahmed Hamid, head of Houthi department for humanitarian affairs coordination and presidency office director, as saying.

Last Wednesday, the WFP accused Houthi group of hindering the start of biometric system to identify people most need aid in a country on the brink of famine.

"The continued blocking by some within the Houthi leadership of the biometric registration ... is undermining an essential process that would allow us to independently verify that food is reaching ... people on the brink of famine," WFP spokesman Herve Verhoosel said.

At his meeting with the UN Humanitarian Coordinator Lise Grande, the Houthi official said some groups insist on the fingerprint system, despite the various devices of identification. "We are ready to study all options to ensure sound lists and beneficiaries access to aid."

Dealing should be "with the state official institutions, without politically endorsing ordistorting some technical problems in such a way to serve the powers that kill Yemeni people," Hamid added.

The Houthi group seeks the WFP and all other agencies to stay in field and will provide them with all facilities, he said, but "if some intend to leave, we can't prevent them, and we can't make concessions that would harm the country."

Some groups are now using media to "hide the rottenness of aid provided to Yemeni people," the rebel official claimed.

Last May, the WFP warned that it may have to suspend the distribution of food aid in Houthi rebel-controlled areas in north of Yemen, over fears of "embezzlements" and diversion of aids from their actual recipients.

On 31st of last December, the program directly accused Houthi rebels of fraud and thieving food aid intended for millions of Yemeni people in need and selling them at markets in rebel-held provinces and cities in north of the country.

Last May,Houthis said their quality-controlling authorities had refused the entry of some 8 tons of grinded wheat for non-compliance with standard specifications applied by the rebels.

Tests have shown insects contained in the flour, which was denied entry into the Red Sea port of Hodeida, according to the Sana'a-based Saba.

In this regard, Hamid told the UN official that her organization had to take measures to limit carelessness towards Yemenis' lives, and his group "has introduced a proposal to abate this problem by buying [food aid] from local market or by providing the aid in cash to people in need."