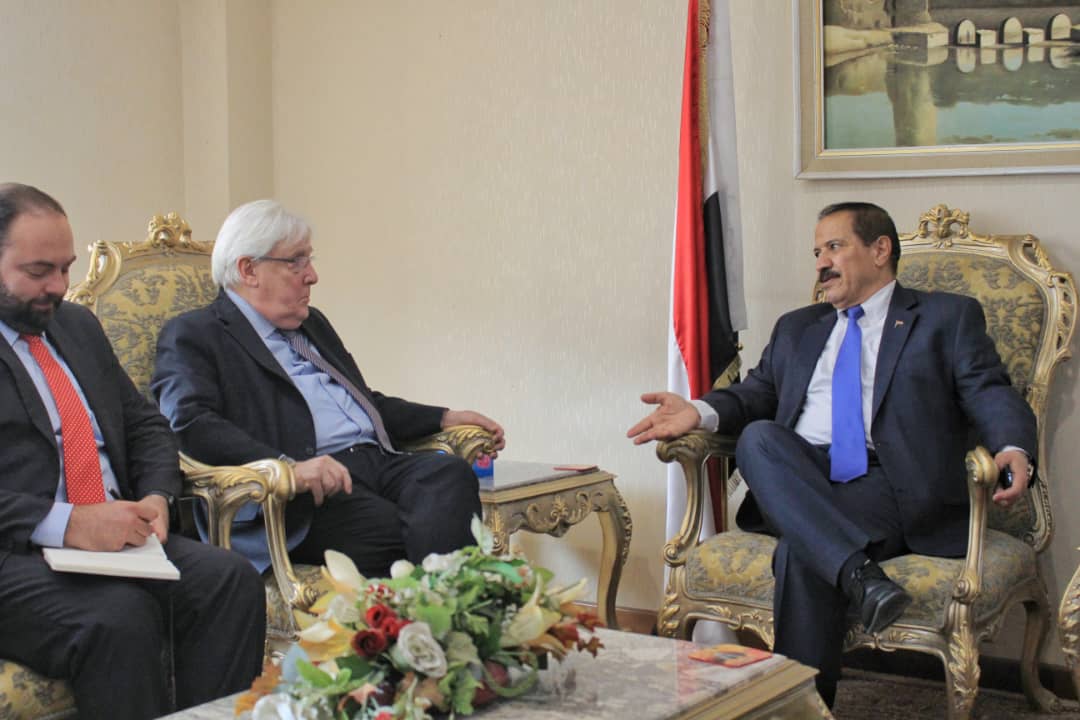 The UN especial envoy for Yemen leftWednesday the Yemeni capital of Sana'a, after one-day trip in which he held discussions with Houthi leader, Abdulmalik al-Houthi, and other officials.

Abdulmalik held the "other party full responsible for persistent blockade on people of Addoraihimi district in Hodeida for almost one year," confirming his group's preparedness for fair peace, on condition that "aggression stops, blockade is lifted and Sana'a airport is reopened," said the Sana'a-based Saba.

Proposals by the UN envoy, at his recent meetings in Sana'a, on prisoner swap deal have been accepted by Houthis but refused by the other party, the rebel leader claimed.

Parties to the nearly 4-year war in Yemen, after 8 days of peace talks in Sweden, reached on 13 December an agreement providing for ceasefire in Hodeida and redeployment of both sides' forces from the Red Sea city and its ports under UN supervision.

But the UN-brokered Stockholm Agreement has been facing many challenges to implement on the ground, as both sides failing to honor their commitments.

On 13 May, Houthis said their forces had completed first phase of one-sided redeployment out of the ports of Salif, Ras Isa and Hodeida, under supervision by UN three teams, in application of the UN-brokered peace deal.

But the government dismissed the move as "farce", noting that the rebels handed the ports to their own coastguard force.

The UN said Monday Yemeni rivals, at RCC meeting, had agreed to a new mechanism for enhancing the ceasefire and the redeployment first and second phases.

Separately, head of the Houthi Supreme Political Council has said the atmospheres were encouraging for progress towards peace, but as long as the "aggression continues, we'll use all our available means to hit the enemy on their own ground until forced to stop their aggression."

Their campaigns and actions prove that the "other party doesn't want peace, and that some aggression parties would be harmed by peace, so they seek to foil any positive steps," Mahdi al-Mashat added at meeting with Griffiths.

Houthi FM HishamSharaf warned of the "collective punishment adopted by the official government against citizens, by hemming in their claims to get passports .. and banning dealing with passports issued by [Houthi-run] migration authority in Sana'a."

Sought peace is for Yemeni people and nation, he added at meeting with the UN envoy, noting that reopening the Sana'a airport "is an urgent issue concerned by citizens and would pave way for inclusive political settlement and peace."

Griffiths assured that efforts are ongoing to reach peaceful solution that would restore security and stability for Yemen and Yemenis, according to the Houthi-run Saba.

The UN envoy is expected Thursday to brief the UN Security Council on the situation in Yemen, and the outcomes of his discussions in some countries as well as Riyadh and Sana'a.

Griffiths' trip comes as part of his efforts to facilitate the stalled Hodeida redeployment and peace talks between Yemeni rivals.

On Monday, the UN envoy met with the Yemeni President AbdRabbu Mansour Hadi in the Saudi capital of Riyadh, after 3 months of tensions over Griffiths' briefing to the UN Security Council last May.

The UN diplomat thanked the Yemeni president and his government for complying with Stockholm Agreement to find a political solution for the 4-year war, the envoy's office tweeted.

We will work together on applying peace paths according to the three terms of reference, with focus on first phase of Hodeida pact, the Aden-based Saba News Agency quoted Griffiths as saying.

President Hadi stressed on obviously agreeing to the fact that Stockholm deal is "the key for discussing any later arrangements."

He also said progress should be achieved in terms of the prisoner swap deal, on the all-for-all basis.

The UN has failed so far in finding a solution for a war that hastriggered what the UN calls the world's worst humanitarian crisis, with most of the population in need for a type of humanitarian aid and immediate protection, including 14 million people risking famine and some 1.8 million children suffering malnutrition.