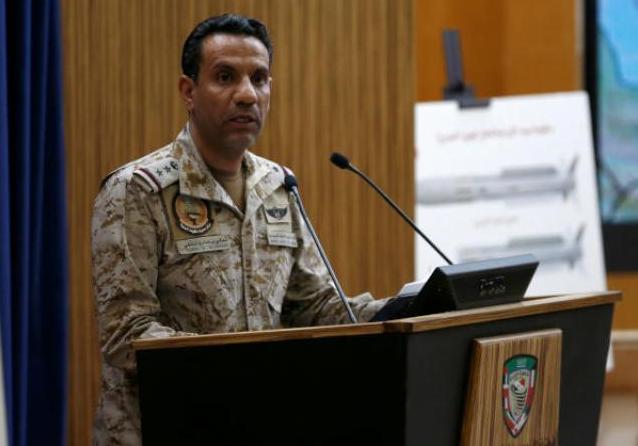 The Saudi-led coalition in support of legitimacy in Yemen accused on Tuesday the Iranian Republican Guard (IRG) of providing the Houthi group with qualitative capacities including ballistic missiles and unmanned aerial vehicles enabling the rebels to target places inside the neighboring kingdom.

Houthi militias have got qualitative capacities no militia around the world can obtain, said coalition spokesman."We are talking about ballistic missiles and targets inside Saudi Arabia and targeting Riyadh and Meccawith Iranian missiles."

Houthis did not have such missiles before, Colonel Turki al-Maliki told AFP, arguing that test on debris of drones have proven the IRG to be involved in providing the group with such capacities.

Houthis sporadically send ballistic missiles on Saudi territory "in reply to coalition airstrikes that target Yemeni civilians and infrastructure," while Saudi Arabia accuses Iran of providing Houthis with such missiles.

On the Houthi claim of targeting Najran airport, Maliki said there was an attempt to target a vital facility, but the alleged one on Najran was failure, noting that results of the "terrorist act" would be announced on time.

On Sunday, Houthis said they have a "bank of 300 vital targets in Saudi Arabia and United Arab Emirates" leading the coalition in support of the internationally-recognized government of President Hadi.

Among the 300 targets are vital military sites and facilities in KSA and UAE, and coalition bases in Yemen, said a Houthimilitary source.