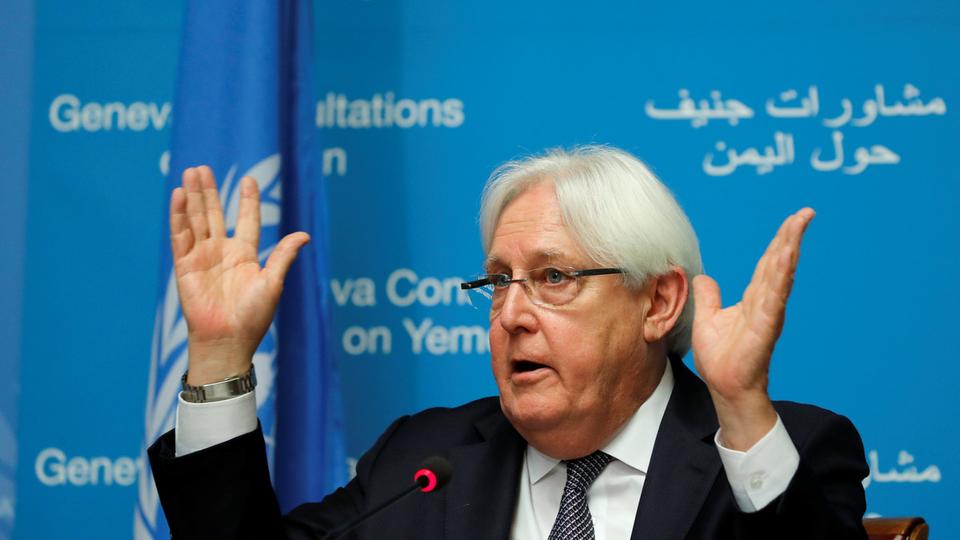 The Yemeni internationally-recognized government has accused the UN envoy of conspiracy and attempt to legitimize the Houthi "fake" pullout from Hodeida ports and to recognize the group's forces as legitimate in areas from which they had supposedly withdrew.

Envoy Martin Griffiths is responsible for failure of the Hodeida pact application, said atechnical report issued by the government team of negotiators.

The report has rejected the "UN team announcement of Houthi initial redeployment out of Hodeida, Salif and Ras Isa ports on 11 May 2019 and entrusting their security to coastguard forces" loyal to the rebel, the Saudi Asharq Al-Awsat paper reported Saturday.

The fragilely-fabricated and unintelligently-crafted event is meant more to add to career of the UN team and its chairman than to lay real, sound stone for sustainable peace, the report added.

"The unilateral step took place in the absence of government members at the Redeployment Coordination Committee tasked with monitoring the redeployment and ceasefire, under Stockholm Agreement."

Didn't the UN envoy and his team know that the Houthi-controlled coastguard had been no longer loyal to the legitimate state's security law and sovereignty?,the report wondered.

The ports' security has been in fact handed to Houthi force, and any attempt to say otherwise would be "either separation from and ignorance of reality prevailing in Yemen since Houthi coup, or a plot that cannot be free from conspiracy and bias in favor of" the group.

"The second possibility is more likely true, based on behavior of the UN envoy and his team since his appointment in February 2018."

"It is also possible that the time pressure has forced the UN envoy and his team to adopt, market and try to legitimize the Houthi unilateral redeployment, as five months have passed since Stockholm Agreement was reached .. and the UN Security Council [15 May]session,at which the envoy would brief, on Yemen  was approaching."

Griffiths is, intentionally or unintentionally, polishing the Houthis, after Stockholm deal gave the chance to take breath while under pressure of government forces' advance at Hodeida fringes, the report claimed.

The "legitimate government and its team have, in the current situation, no option other than taking strict way as to the pact application circumstances and tools, and the UN envoy and his team behavior .. The deal three courses (Hodeida and its ports, Taiz understandings, and prisoner swap) should be implemented simultaneously," the report read.

On Friday, the Yemeni President AbdRabbu Mansour Hadi sent an official letter to Guterres talking about unprecedented, unacceptable desecrations committed by Griffiths, whom the Yemeni government accused of siding with Houthis following his latest briefing to the UNSC.

Later on Friday, UN spokesman quoted the Secretary-General as saying he fully trusts his YemenEnvoy Martin Griffiths, in reply to the letter of President Hadi who had put conditions to keep dealing with the envoy.

The UN chief promised Hadi that his envoy would double efforts helping Yemeni rivals (the internationally-recognized government and Houthi group) to meet their commitments declared in Stockholm and to reach political sustainable solution for the conflict, the spokesman added.

The UN has so far failed to find a solution for Yemen conflict that has triggered what it calls the world's worst humanitarian crisis, with most of the population in need for a type of humanitarian aid and immediate protection, including 14 million people risking famine and some 1.8 million children suffering malnutrition.

Officials at the Yemeni government have increasingly criticized the UN envoy for partiality and unfairness, after the Houthi "fake withdrawal" from Hodeida three ports.