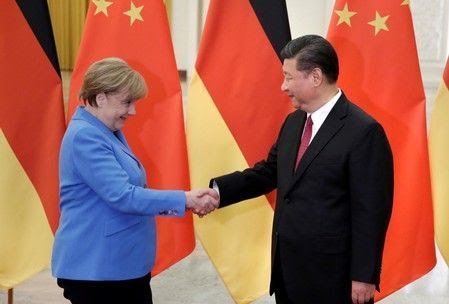 Violent protests in Hong Kong have complicated a three-day trip to China by Chancellor Angela Merkel that she plans to use to press for greater access to markets there for German businesses suffering from a slowdown at home.

Merkel is taking a large business delegation with her and wants to use the trip, which starts on Thursday, to push Beijing to open up its markets and embrace fairer competition - a task made harder by the year as China’s growing economic power gives it more leverage.

Normally, the birth on Saturday of twin pandas in Berlin Zoo to parents loaned by China would have helped the diplomatic climate. But developments in Hong Kong mean the visit is shaping up as Merkel’s toughest yet to China.

Ahead of her departure, prominent Hong Kong activists wrote to the chancellor urging her to be guided by her memories of life in dictatorial East Germany, and to be on her guard in her talks and business dealings with Beijing.

Hong Kong leader Carrie Lam on Wednesday withdrew an extradition bill that triggered months of often violent protests so the Chinese-ruled city can move forward, but some said the move was not enough.

The twin pressures mean Merkel will have to work hard to strike the right tone during the trip, government sources said.

The situation is complicated still further by the trade conflict between China and the United States, which is hurting internationally exposed German firms caught in the crossfire.

Germany’s economy contracted on weaker exports in the second quarter, and leading economists say it is facing a recession.

But while US President Donald Trump has pressed U.S. companies to look at ways to close their Chinese operations and make more of their products at home, Merkel wants to start a new phase in the European Union’s relations with China.

Germany, which traded almost 100 billion euros ($111 billion) in goods with China in the first half of 2019, holds the rotating EU presidency in 2020, when Merkel is planning an EU-China summit with a view to achieving a common European stance.

Michael Winzer, head of the Konrad Adenauer Stiftung in Beijing, saw some Chinese readiness to compromise with the EU.

“We see a ‘strategy of embrace’ from China, which is seeking more contact with Germany and Europe because of the current U.S. policy,” he said.