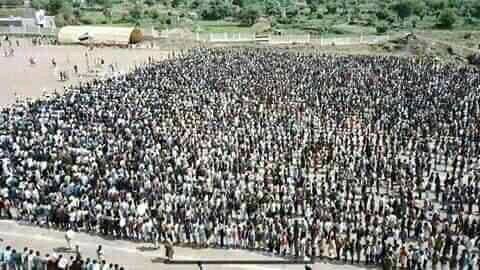 Activists from Taiz Governorate, in southern Yemen, broadcast a video on Sunday that they said was of thousands of fighters returning to the province from the frontlines of fighting on the southern border of Saudi Arabia.

The activists said that the return of the two fighters was in response to the appeal of Sheikh Hammoud Saeed Al-Mikhlafi.

In late August, Hammoud al-Mikhlafi called on the people of Taiz fighters in the ranks of the coalition, especially on the border fronts with Saudi Arabia, to return to their city.

This comes at a time when Taiz is witnessing a popular movement calling for comprehensive changes for all the leaders of the province, led by the governor, Nabil Shamsan.

On Saturday, mass demonstrations took place amid Taiz to condemn the assassination of the Commander of the 35th Armored Brigade Brigadier General Adnan Al-Hammadi, demanding the speedy investigation and disclosure of the circumstances of the crime by a professional and impartial committee subject to popular control.