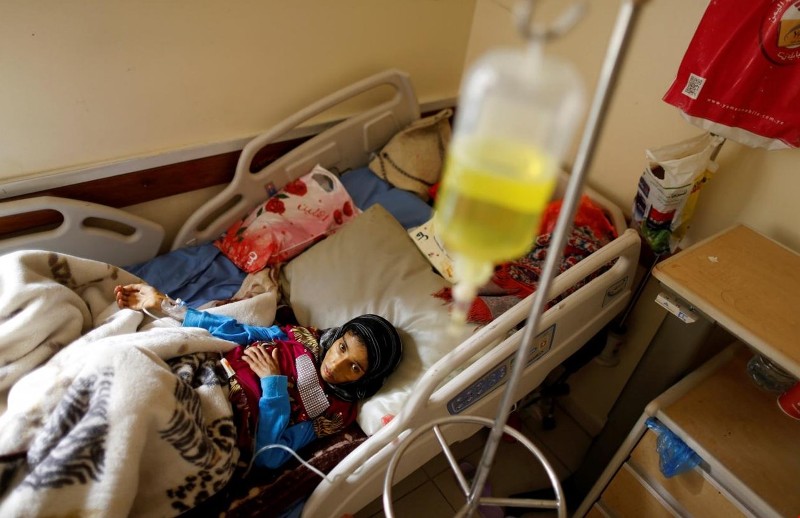 The first humanitarian flight is expected to depart the Yemeni airport of Sana'a early next February, the Houthi group said Tuesday, blaming the Saudi-led coalition's "political motives" for the delayed commencement of the medical bridge.
"The World Health Organization blames the countries, which will host the patients, for the stalled start of medical bridge, but this is no the full truth," the Houthi-run al-Masyra TV quoted head of the medical bridge committee (MBC) as saying.
"Political motives from the aggression [coalition] forces are behind the obstruction of the bridge for two years now," Mutahar Derweesh added without further details.
"The first flight is expected to be launched on the 3rd of next February, as the WHO stated," the Houthi official said. But "we cannot confirm the organization's commitment to meeting its promises, in terms of the flight date.
The Houthi group and the International Committee for Red Cross have agreed to airlift 50 patients, with one attendant for each, he added.
"The organization, however, has recently informed us that only 30 patients and 30 attendants would be transported in the first flight."
The MBC has "temporary paused sorting the patients' files following the repeated delay of the first flight and the United Nations' ambiguity," Derweesh said.
The Saudi-led coalition has been imposing blockade on commercial navigation to and fro Sana'a airport since early August 2016, allowing only for UN and humanitarian groups' flights.
Yemenis from northern and western provinces, who want to travel abroad, have to take up to 15 hours in land trip to the city of Aden or Seyoun in Hadhramout where the airports provide limited flights abroad.
The UN and WHO have for the tenth time disavowed from operating the medical trips abroad via Sana'a airport, Houthi health minister said last October.
"The 20th of October was set a date for airlifting 50 patients by the first medical flight," Taha al-Mutawakil added at press conference in Sana'a. But, 24 hours before that date, "the UN excused after the patients had taken pains to travel to Sana'a city."
He accused the UN of abusing the Yemenis' pains and deepening their tragedy, holding the WHO "legally and morally responsible for such irresponsible acts."
Last November, the Saudi-led coalition fighting in Yemen said it would allow for patients travel from Sana'a for medication abroad.
The coalition command has decided to run flights, in cooperation with WHO, to airlift patients from the Yemeni capital of Sana'a to countries where they can receive suitable medication, the coalition spokesman, Col. Turki al-Maliki said in a statement.
At time, the WHO said it would soon work on conducting humanitarian, medical flights for cases that cannot be treated inside Yemen.
WHO devotes its efforts to serve the Yemeni people and support, in the first place, patients' needs, it added on Twitter.
More than 320,000 patients have been unable to receive treatment abroad because of the blockade, the ministry spokesman said, noting that more than 43,000 patients had died for lack of required medical supplies and the closure of Sana'a airport, according to the Houthi-run al-Masyra TV.