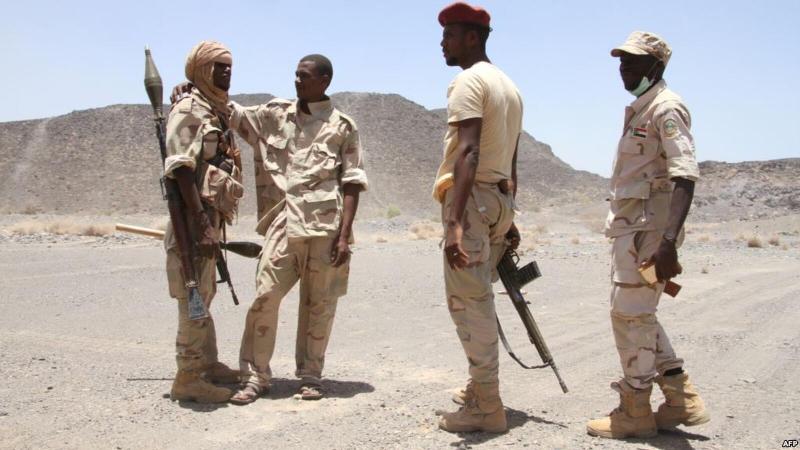 Sudanese activists on Sunday launched a campaign on social media calling for the Emirati ambassador be expelled from Khartoum, after Abu Dhabi was said to be involved in recruiting Sudanese people to fight in Yemen and Libya, by deceiving them about the job's nature.
The campaigners urged their government to break off relations with the United Arab Emirates and to take urgent measures to "return all those recruited by Emirati firms for fighting, on behalf of Abu Dhabi, in Yemen and Libya."
Earlier on Sunday, Sudanese families staged a rally outside the UAE embassy in Khartoum, in protest of Emirati firms' contracts with their sons and sending them to fight in Yemen and Libya, instead of hiring them at security services in the UAE as stated in the contracts.
Tens of Sudanese protesters outside the UAE mission lifted billboards reading "No for mercenary jobs" and "No for deception", media reported.
The Emirati 'Black Shield' is a private security safeguard company, the firm has said in a statement, denying all "allegations" about deceiving or forcing any of its staff to work in any job camouflaged in terms of its nature, system, location or workforce.
Last Friday, a Sudanese family called the interim government to help bring their son back from the UAE, complaining that "he was held for 3 months in a training camp after being deceived, along with others, to work in security safeguard jobs."
Al-Jazeera Live TV quoted Abdullah al-Tieb Youssef as saying that tens of Sudanese were deceived to work in security services but, for their surprise, they were sent to training camps where they stayed 3 months.
"My brother has told me he was trained on heavy weapons and was asked to choose travel to Libya or Yemen, after being offered high payment," Youssef added, calling for his brother be returned to Khartoum.
An activist has said he has documented information that the 3-month training is designed for military work and has nothing to do with security services.
The training "camp has so far accommodated 12 batches, 9 of which have been directly airlifted from Sudan without undergoing the usually taken measures like medical tests and national service documents," Amjad al-Basiri added on Facebook.
One of the "victims" has said they were "detained inside Ghieti military training camp at Saudi-Emirati borders. The jobs were offered by the Emirati Black Shield company for security services through the Amanda travel agency."
"The camp's management takes very strict measures, such as not allowing [for recruits] to leave the camp in any case or to make a telephone call," al-Farzaq Dafullah added.