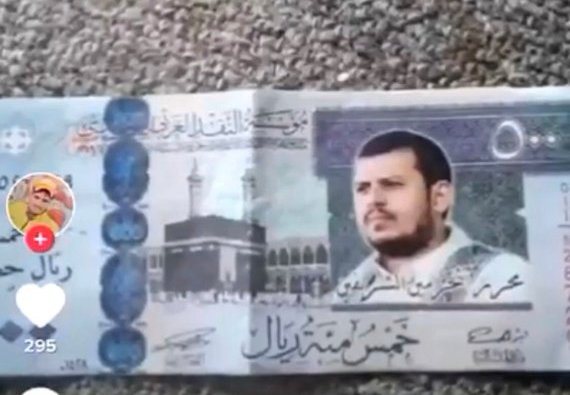 The security services in the Kingdom of Saudi Arabia seized a Yemeni resident who placed the image of Abdulmalik Al-Houthi, leader of the Houthi group (Ansar Allah) in Yemen, on a sheet of 500 Saudi riyals.

"The security authorities in Jeddah seized a resident of Yemeni nationality who appeared on social media, placing Abdul Malik Al Houthi on a coin of 500 Saudi riyals," the Jeddah Municipality secretariat tweeted on Friday evening.

"He was referred to the competent authority to apply the sanctions against him.", it added.

A video clip showing al-Houthi's image on the Saudi currency sparked widespread criticism in the kingdom.

One of the pioneers of "Twitter" wrote at the expense of Counselor Saad Shaiban, "A Yemeni resident among the 12 million foreigners who contribute to the development of the country's economy places the image of al-Majusi Abdulmalik al-Houthi on the category of 500 riyals as if he defied the state and its regulations."

Our soldiers are martyred at the southern border and these Zaidi people are blessed with prosperity and trade in our country, and above all this is treachery and contempt for us, "as it put it.