Yemeni "legitimate" gov.t: Griffiths is no longer impartial and fair 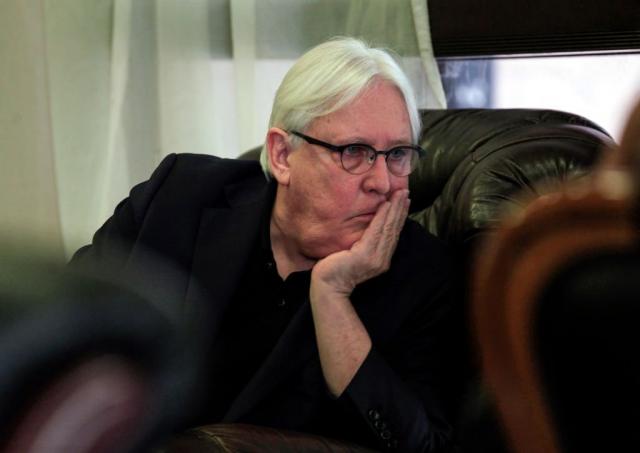 The Yemen's "legitimate" government Spokesman, Rajeh Badi, said in statement to the Saudi daily Asharq Al-Awsat on Friday: " "UN envoy Martin Griffiths is no longer impartial and fair in the performance of the mission entrusted to him in accordance with international resolutions."

He added: "(Griffiths) no longer works on the implementation of Security Council resolutions and international legality, and clearly deviated from the course of his mission to Yemen."

This was the strongest accusation of the Yemen's internationally recognized government of Briton Martin Griffiths since he took up his post two years ago as a successor to former UN envoy Mauritanian Ismail Ould Cheikh Ahmed.

The Yemeni internationally-recognized government said Thursday it rejects the UN management of the Hodeida three ports, after it strongly criticized on Wednesday the UN envoy's briefing to the Security Council.

The letter of Envoy Martin Griffiths had nothing new or significant on the current situation, said government Foreign Minister Khaled al-Yamani.

"Western countries direct the especial envoy asthey see on Yemeni issue," he told the Saudi Asharq Al-Awsat. So, "what he said was far away from the reality, and he addressed marginal issues unrelated to the core matter."

Yemeni government has been "familiar to such letters from the envoy, and this has been his way in dealing with events," FM added.

In his briefing to the UN Security Council on Wednesday, UN envoy to Yemen Martin Griffiths said: "Despite the significance of the last few days, Yemen remains very much at the crossroads between war and peace. If the ceasefire in Hodeida is generally holding, generally holding, carefully chosen words, intensification of the conflict in all its dimension.

Griffiths said "So there are signs of a new beginning in Hodeida and change, I’d like to think in Hodeida is now a reality. He pointed out that "Between 11 and 14 May, Ansar Allah have undertaken an initial redeployment of forces from the ports of Hodeida, Salif and Ras Isa under United Nations monitoring.

He added: "As I have said to this Council many times since December, since that agreement was made in Sweden, we never expected the implementation of this agreement to be easy. And it hasn’t been. But with the continuous commitment of the parties and the Coalition, the swift and decisive support of this Council and the stewardship of General Michael’s mission, UNMHA, we have seen the first concrete step towards the implementation of the Hodeida Agreement."

According to the source, Speaker has said "Houthis stopped dealing with the UN [former] Envoy Ismail Ould Cheikh Ahmed until his replacement, and we will do the same, since we are the stronger party in the equation."