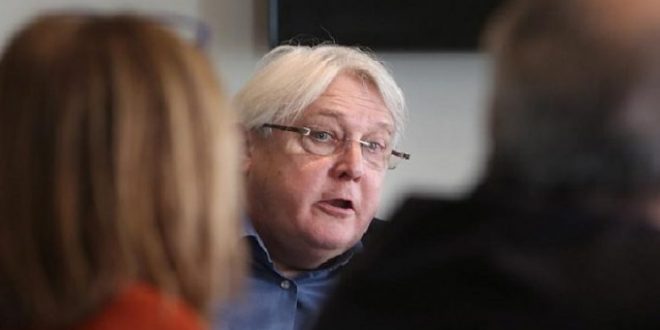 The Yemeni government has been increasingly criticized the UN Envoy Martin Griffiths, particularly following his briefing to the Security Council last Wednesday.

The latest of such criticism was uttered Saturday by a government negotiator, who accused Griffiths of over-exceeding hisproper limits and acting in violation of his tasks.

The UN envoy "is no longer a just mediator, as he has over-exceeded his proper limits and acted in violation of his tasks," said AskarZoail on Twitter, without further details.

This comes one day after the government spokesman, Rajeh Badi, told the Saudi Asharq Al-Awsat paper that Griffiths "is no longer impartial and fair in performing his mission."

The UN envoy "no longer works on the implementation of the Security Council resolutions and international legitimacy," Badi added. "He has clearly deviated from the course of his mission in Yemen."

This has been the strongest charge by the internationally-recognized government against the British diplomat since he took the post as UN envoy more than one year ago in place of the Mauritanian Ismail Ould Cheikh Ahmed.

On Thursday,the Yemeni government said it rejected the UN management of the Hodeida three ports, after it strongly criticized on Wednesday the UN envoy's briefing to the Security Council.

The letter of Envoy Griffiths had nothing new or significant on the current situation, said government Foreign Minister Khaled al-Yamani.

"Western countries direct the especial envoy as they see on Yemeni issue," he told the Saudi Asharq Al-Awsat. So, "what he said was far away from the reality, and he addressed marginal issues unrelated to the core matter."

On Wednesday, Griffiths said there were worrisome signs over the conflict in Yemen, despite the first concrete step in the Red Sea city of Hodeida.

Yemen is still at crossroads between war and peace, despite the progress made in the last days, after Houthi forces had redeployed from the ports of Hodeida, Salif and Ras Isa, Griffiths added in his briefing to the UN Security Council. While ceasefire remains standing in Hodeida, there is worrying escalation of conflict in many aspects.

Change in Hodeida is now a reality, and there are signs of new start in Hodeida, he said. "Between 11 and 14 May, Ansar Allah had undertaken initial redeployment from the three ports under UN monitoring," and Houthi forces "had left those three ports."