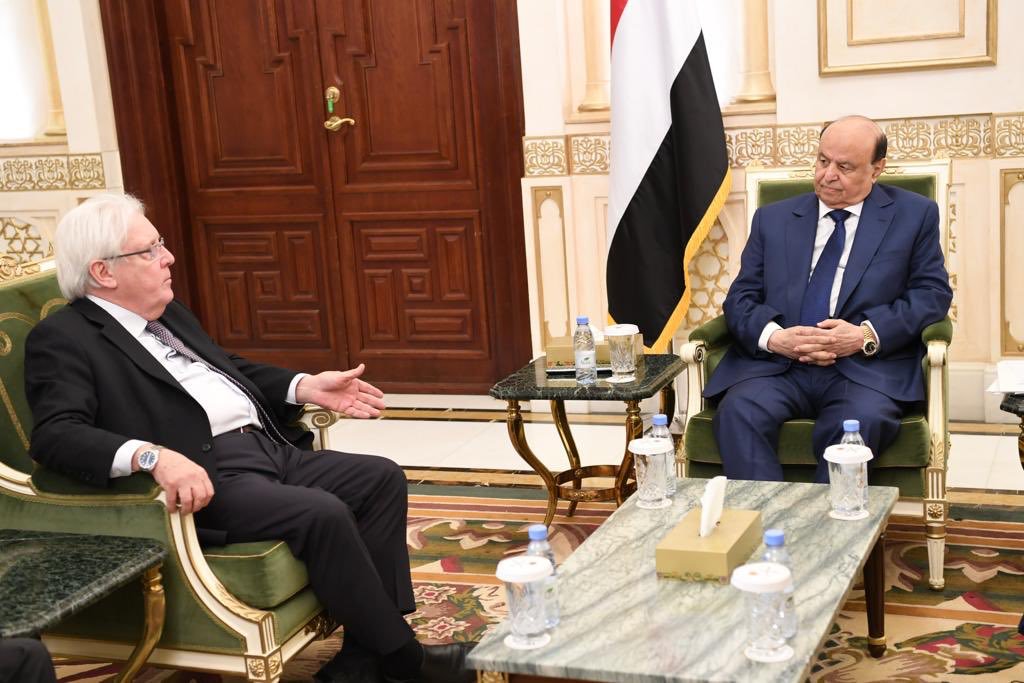 The Yemeni President office has said it received assurances from the United Nations on its Envoy Martin Griffiths' commitment to applying the Hodeida deal "correctly", after President Hadi had accused the envoy of closing his eyes as Houthis reneging the Sweden pact.

President AbdRabbu Mansour Hadi has received assurances from the UN Secretary-General on his envoy's abiding by the three terms of reference and on the correct application of Hodeida deal according to the UNSC resolutions and Yemeni law, Hadi office director, Abdullah al-Alimi added.

The UN sent Di Carlo to Riyadh Monday to discuss with President Hadi and his government officials the situation, following Hadi's criticism against Griffiths.

Hadi meeting with Di Carlo was "constructive and fruitful," said Alimi. "It addressed all issues pertaining peace talks, all comments on steps taken and the return to the full implementation of Stockholm Agreement."

The UN official "stated she would be in constant contact with the government to ensure peace steps go according to the terms of reference and accords, and the UNSC resolutions are applied. She also valued the government's efforts in responsibly and positively dealing with the UN efforts," he added on Twitter.

On Monday, Hadi accused Griffiths of conforming to "Houthi farces in dodging the Sweden pact" fulfillment.

Steps taken by the UN envoy "have brought about public and national rejection and pressure from all government institutions, but also from the government team participating in the pact implementation on the ground," Hadi added at meeting with Di Carlo in Riyadh.

On Tuesday, the UN Security Council members "underlined their full support" for Griffiths and called on the warring parties to engage constructively and continuously with him and to honor their commitments under Stockholm Agreement to enhance political solution.

On 14 May, the UN said Houthi group had withdrawn from Hodeida, Salif and Ras Isa ports, in application of the UN-brokered Stockholm peace deal that made breakthrough in UN efforts to end war in Yemen.

The move raised wrath of the Yemeni government that dubbed Houthi withdrawal as farce.

On 22 May, President Hadi sent an official letter to the UN SG AntonioGuterres talking about unprecedented, unacceptable desecrations committed by Griffiths, accusing the UN envoy of seeking to "provide guarantees for Houthi militias to stay in Hodeida under UN umbrella."

The Yemeni President asked the UN chief for sufficient guarantees that those violations would be reviewed and not repeated.