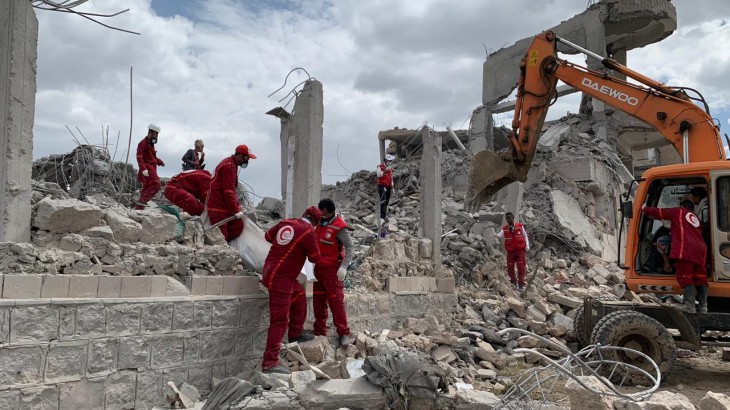 The International Committee of the Red Cross (ICRC) said on Sunday evening that 130 detainees were killed after an air strike targeted a building used by the Houthi group (Ansar Allah) as a prison for prisoners in Dhamar governorate (90 kilometers south of Sana`a).

"An air strike destroyed a building that was being used as a detention facility in Yemen, killing or wounding all the detainees inside.", the ICRC said in a statement seen by Debriefer news agency.

"The facility held around 170 detainees and 40 them were being treated for injuries. The rest are presumed dead, though the death toll has not been confirmed," it said.

"It will likely take several days to locate all the bodies," the statement added.

"Witnessing this massive damage and seeing the bodies lying among the rubble were a real shock," Franz Rauchenstein, head of the ICRC delegation, said in the statement after visiting the scene..

He expressed outrage at the incident, stressing that "the lives of those who are not actively participating in the fighting in this manner should not be lost."

The statement said that "the attack sends a strong reminder that the rules of war requires that no one or anything may be targeted in attacks except military personnel and military objects."

He stressed that "all feasible precautions must be taken to end harm to civilians and other persons not taking part in hostilities such as detainees."

On Sunday, Yemen Red Crescent volunteers removed bodies from the rubble with the help of bulldozers and other heavy machinery, the ICRC said, adding that it would take several days to find all the corpses.

“These detainees shall not be and are not forgotten,” said Fabrizio Carboni, the ICRC’s regional director for the Middle East in a statement, urging Yemen’s warring parties to behave more responsibly when conducting military operations.

“The conflict in Yemen is claiming too many civilian victims and others not taking part in hostilities,” he said.

The Houthi group (Ansar Allah) accused the Saudi-led Arab coalition to support legitimacy in Yemen of targeting a prison for Yemen's internationally recognized government prisoners in the northern province of Dhamar resulted in the death and injury of 185 people.

While coalition said its warplanes launched air raids on the group's military site in Dhamar.

The Ministry of Health and Population of the Salvation Government of the Houthis, which controls the capital Sanaa, said in a statement that at least 185 people were killed and wounded in coalition warplanes' airstrikes on a prison for "legitimate" government prisoners in Dhamar.

The ministry added that recovery of the victims is still ongoing at the moment of writing this news amid the difficulty of the arrival of paramedics due to the continued flight over the area, stressing that most of the injuries are serious.

For its part, announced the leadership of the Saudi-led Arab coalition on Sunday that it "destroyed a military site of Houthi militias in Dhamar", pointing out that it is "stores for drones and air defense missiles," according to the saudi "Al-Arabia"TV.

The Coalition added that this operation "is consistent with international humanitarian law and its customary rule and all preventive measures have been taken to protect civilians. "