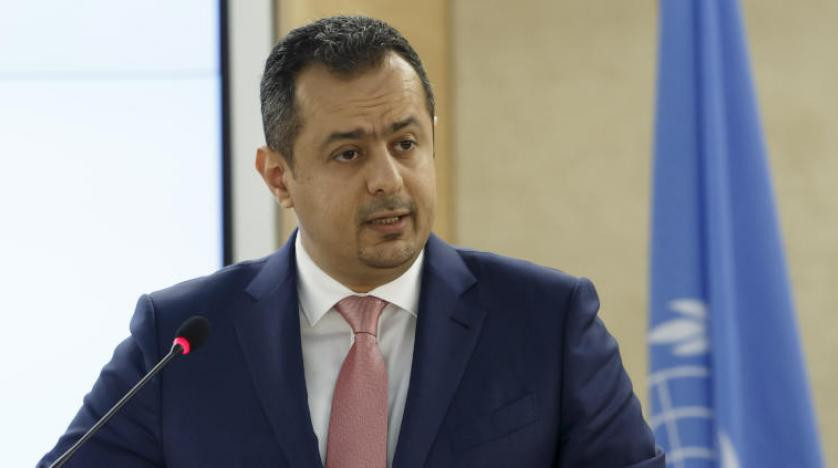 A source at the Eisi Trading Group (ETG) has mocked at theYemeni prime minister's talk addressing the potential end of oil monopoly, in an implied hint that the ETG-affiliated ASA is the company monopolizing the market of oil derivatives.
What PM Maeen Abdulmalek publicly said is based mainly on deep ignorance of the oil market's reality, and an attempt to renege the government's commitments to repaying the ASA's debts, the source added.
"The oil market is dominated by no monopoly, following the Yemeni President's instructions (in 2018) to open the door for all companies to enter the oil market.
"His ignorance of procedures taken to import oil and his evasion to assume the responsibility for his failure in dealing with this issue have made the premier falsify the facts. All oil imports take place under transparent measures that are co-controlled and co-implemented by many government bodies (ministry of oil, ministry of finance, ministry of electricity, Yemeni Petroleum Company (YPC), Aden refinery and the Central Organ for Control and Audit (COCA).
"All oil imports and sales to the government are conducted through tenders officially advertised in the official gazette ... Competition is opened for all companies, and the ASA has lost many bids," the ETG source claimed, noting that the oil market is freed and open for all.
"Is it reasonable for the prime minister to deal with oil importation so superficially? Or is it an attempt to show false heroism by declaring the war against illusive monopoly?"
The main reason behind what the PM said "is that the government does not know how to deal with the Tender (7) advertised in July 2019, which was won by ASA under legal procedures taken during the August events in Aden. 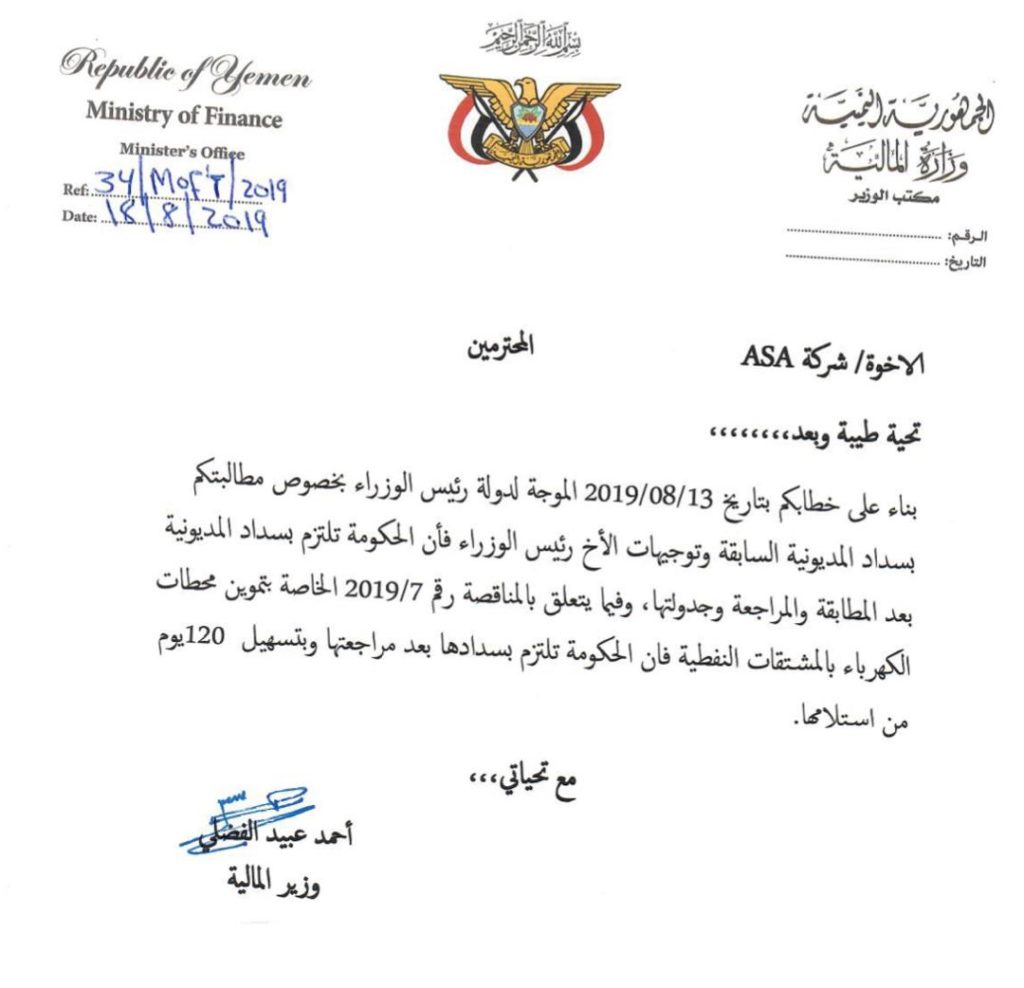 Based on a letter by the Aden refinery managing director, the premier gave orders (written by his own hands) to complete the Tender (7) procedures so as to meet the urgent needs for fuel."
"Since it has its own commitments towards its suppliers and is under pressures to repay the price of oil derivatives imported on behalf of the government, the ASA company [in a letter] gave the government the right to act at its discretion – to either cancel the tender or launch another.
"The company said it was looking forward to government's repayment of a part of the debts payable for ASA," the source said adding that the debt of the ministry of electricity alone is US$ 140 million, in addition to the debt of its Shabwa office, which ASA supplied after the premier had committed himself to repay the company within one week, "but not yet".
The aim of ASA "letter was to get the company's dues, or at least an official letter stating that the government would take steps to repay 80 million dollars of the admitted debt, start official repayment procedures, send a copy of the letter to the supplier as a proof that all parties are seriously willing to repay its debts, and start negotiating with them to discharge supplies."
The Yemeni PM is legally responsible for delayed repayment, the source warned, as the "supplier has already begun legal actions against ASA."
In coincidence of his "illusive decisions, the premier has resorted to inciting against ETG by media campaigns .. only aimed at distracting attention from the government debit payables, to carry favor with some commercial and political competitors and to cover corruption deals."
The source called the Yemeni President to form a neutral committee to investigate "prime minister's exploiting the power in favor of suspected trading ties at the expense of the public interest, and to find out corruption points in all the government institutions," expressing the ETG's willingness to disclose all its files before that committee.
ETG appreciates the situation experienced by Yemen, but "when get targeted and forced to the corner, we are pushed to explain for the public opinion and refute the wrong charges against us."
"I challenge the PM and his mouthpieces to prove one corruption charge against Eisi, who took a strong, clear stance against the coups in Sana'a and Aden," the source added.
On Sunday, the Yemeni internationally-recognized government decided to form a committee tasked with monitoring the bids and allowing the chance for all traders so as to end monopoly, volatile prices and crises in oil markets.
The decision raised broad clamor, as it came 20 months after the Yemeni President Abd Rabbu Mansour Hadi decreed (in March 2018) to liberalize the market of oil derivatives, in order to end oil repeated crises in Houthi-held areas, following the rebels' arbitrary measures.
Under the decree, all private traders and firms are allowed to import and sell oil derivatives in all Yemeni areas, including those under Houthi control, and suppliers are exempted from all customs duties for three years.
Premier Abdulmalek is trying to shift the blame, for oil crises, to the liberalization of the market.
Following its leading position beside the Yemeni legitimacy, ETG has lost many of its interests in northern provinces held by Houthi militias. 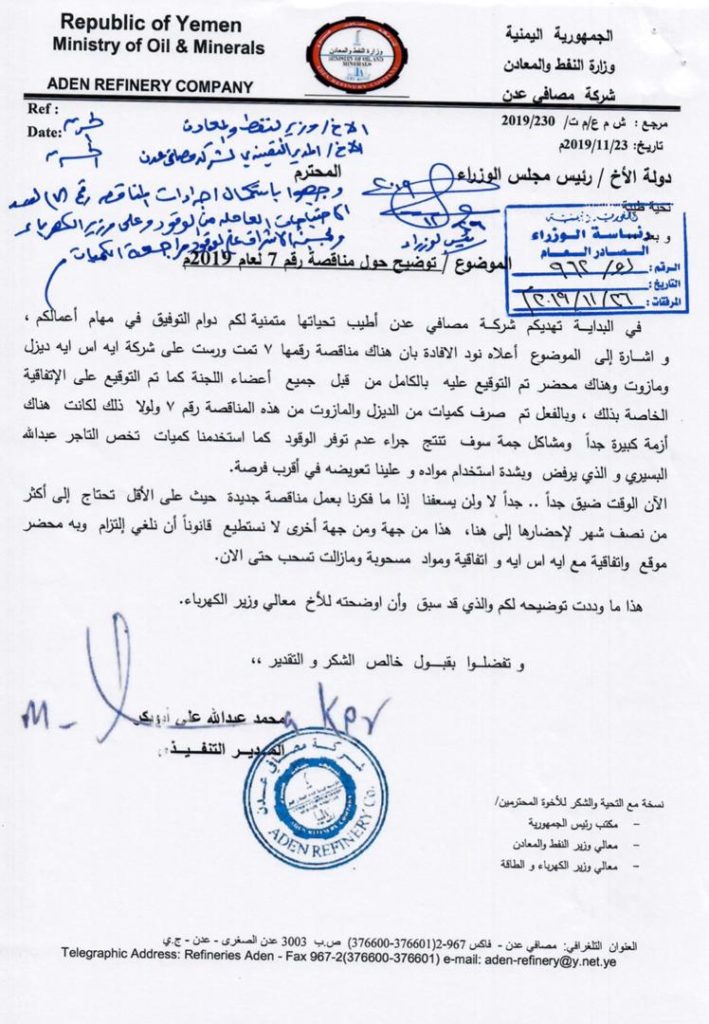 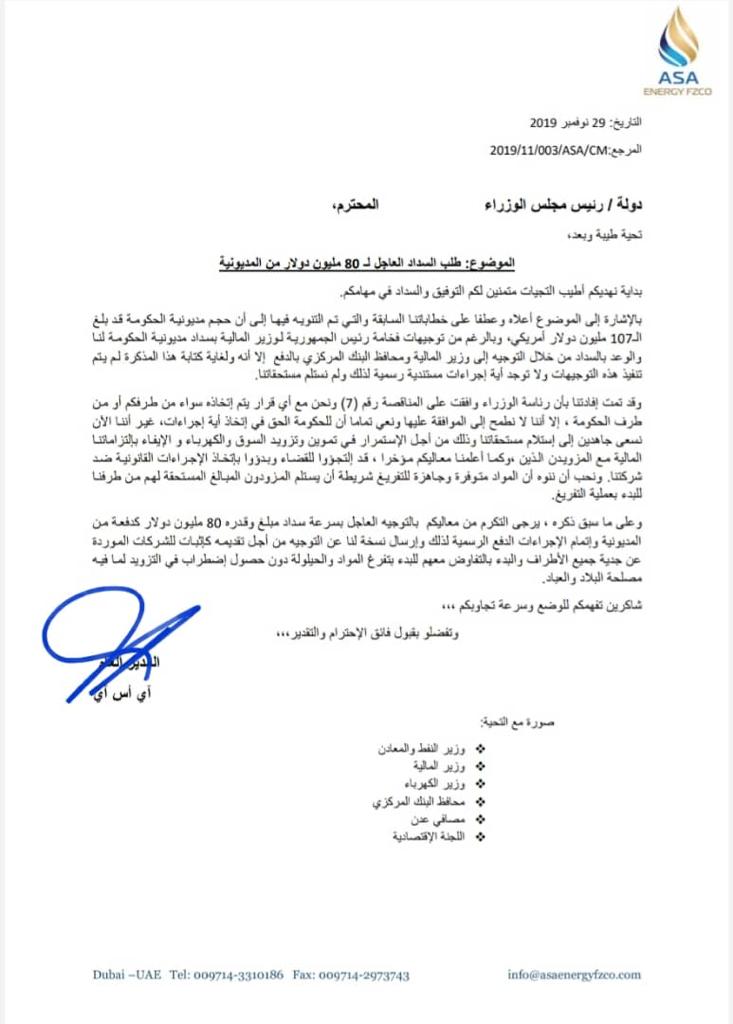 Because of his failure, the PM raises issues to distract public attention from corruption files, in which Dr. Abdulmalek is involved, according to informed source.
The premier has given instructions continuing the monthly payment of 50 million Yemeni rials and 70,000 US dollars for a committee he formed to monitor the oil grant gifted by Saudi Arabia to Aden electricity, although the donation was stopped some one year ago, the source added.
Among his irresponsible actions, the Yemeni PM has exempted cooking gas suppliers from customs and tax duties, as shown in the document obtained by Debriefer.
He has stopped investigation into a corruption deal surrounding the exchange of more than 14 billion rials at the Central Bank of Yemen, ignoring COCA report, what pushed the UN panel tasked with monitoring of sanctions on Yemen to intervene and open this vague file, according to information circulated by government officials.
After his appointment as the premier, Abdulmalek has kept his previous post – as minister of public works – vacant, in violation of law, with firsthand sources attributing his position to his intention to direct the ministry's works in favor of Sagheer Sons company, with whom the PM has interests. 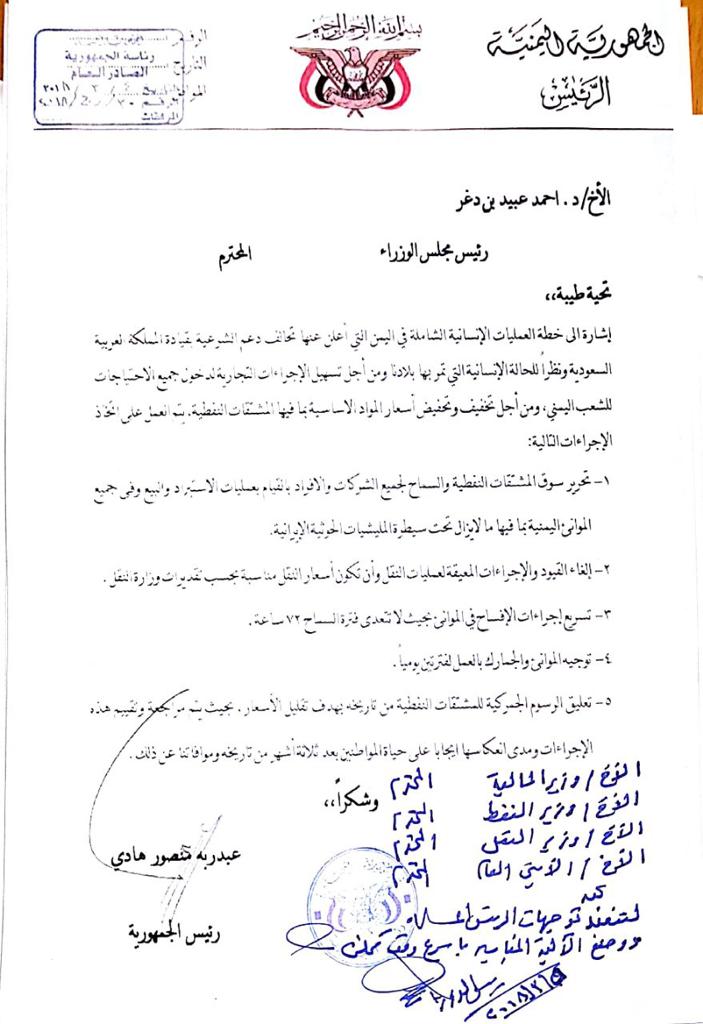