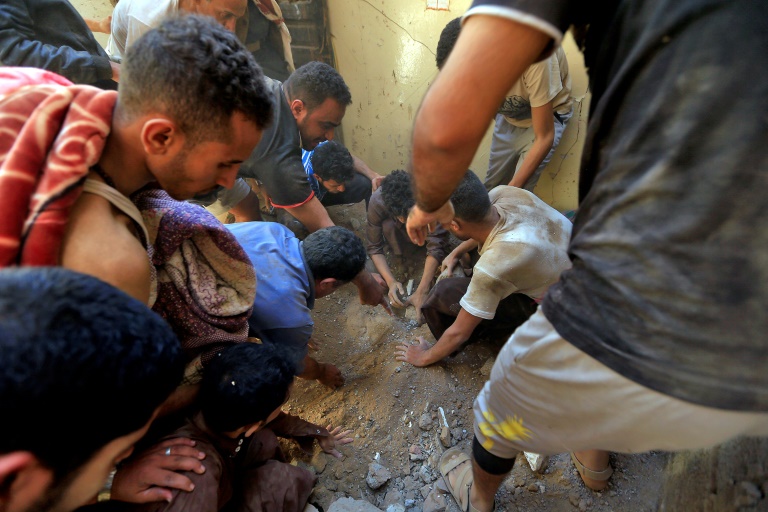 The Yemeni government on Thursday condemned the killing of six people in a raid by the Saudi-led Arab Coalition to Support Legitimacy, which targeted the capital, Sanaa, which is controlled by the Houthis group(Ansar Allah).

Minister of human rights in the "legitimate" Government, Mohammed Asker said in two tweets on Twitter:"I condemn in the strongest terms the killing of six civilians, including four children from one family, in air raid on a house in Sana'a,".

He called on the "National Commission of Investigation (government) to do its part and bring the perpetrators of the targeting to justice in order to achieve the principle of redress for victims.

The Saudi-led Arab Coalition for the Support of Legitimacy early on Thursday targeted the neighborhood of "Raqas" housing in the Yemeni capital Sana'a, controlled by the Houthis group (Ansar Allah), killing six people, including four children from one family and two men and wounding 71 others, including 27 children, 17 women and 27 men.

This is the first time that the Yemen's legitimate government has condemned targeting of civilians by Arab coalition aircraft, which has carried out quite a number of air strikes that claimed the lives of hundreds of civilians in Yemen, provoking the discontent of international organizations led by the United Nations, which considered that some strikes amounted to "war crimes".

Askar considered "endangering civilians by placing military installations in the middle of the residential neighborhoods, as happened in Sa'awan months ago, a crime and a flagrant violation of international humanitarian law."

According to the coalition account, the raids "accurately hit legitimate military targets, which military intelligence confirmed to include military bases, establishments and weaponry depots of the Iranian-backed Houthiterrorist militias."

Saudi Press Agency reported that Turki al-Maliki, spokesman of the saudi-led Arab coalition, said in a statement that the findings related to a military operation conducted on Thursday in Yemen's capital Sanaa were referred to the Joint Incident Assessment Team for probing the possibility of accidental civilian casualties.

Since March 26, 2015, the Arab Coalition has carried out ground, air and naval operations against the Yemeni Houthis in support of the forces of Yemeni President Abdurbo Mansour Hadi and his government to restore him to power in Sana'a, which is dominated by the Houthis and most areas north of the country since late 2019.