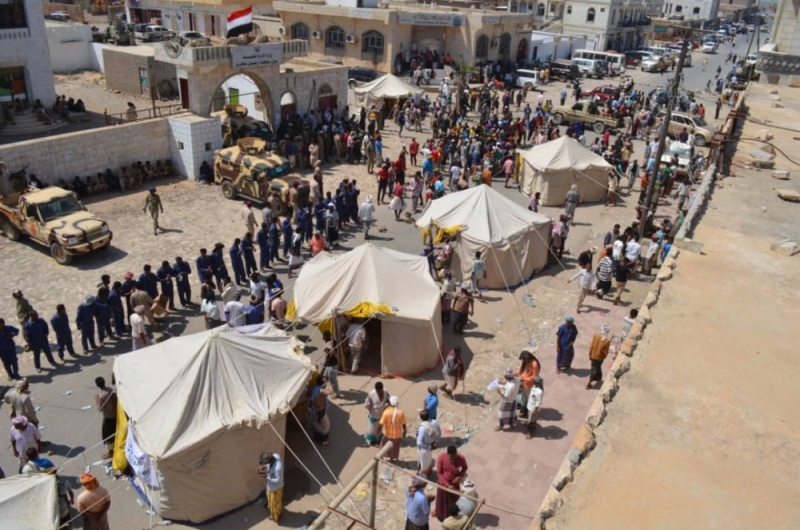 Tens of the Emirati-backed Southern Transitional Council (STC) supporters on Wednesday erected tents outside the office of Socotra governor calling for his removal.

The United Arab Emirates has been lobbying a number of loyalist leaders in the southern island against Governor Ramzi Mahroos, and called STC affiliates to stage a protest on Wednesday and call for his ouster, local sources told Debriefer Tuesday.

The UAE mobilization against Mahroos after Socotra airport denied on Saturday entry of foreigners, working for the Emirati Khalifa foundation, who had "no official visas".

The STC armed supporters erected tents in front of, and blocked streets leading to, the local authority building and the Central Bank of Yemen in Socotra provincial capital of Hadibo, local source told Debriefer.

"The gunmen raised boards with wordings calling for the departure of Governor Mahroos and local authority officials over their stance opposing the Emirati moves in the archipelago.

"Yemeni government troops have been deployed in the nearby of the governorate office in precaution for any STC escalation steps," the source added.

On Tuesday, Socotra executive office rejected what it said "abuse of humanitarian work by some bodies working in Socotra, in violation of internationally-applied and recognized laws and rules."

Early this week, Yemeni activists circulated photos for a number of UAE-based Socotra people at a meeting in support of the STC against the governor.

"The meeting was called for by Abu Dhabi to prepare for events against local authority" of the island, the activists said on social media.