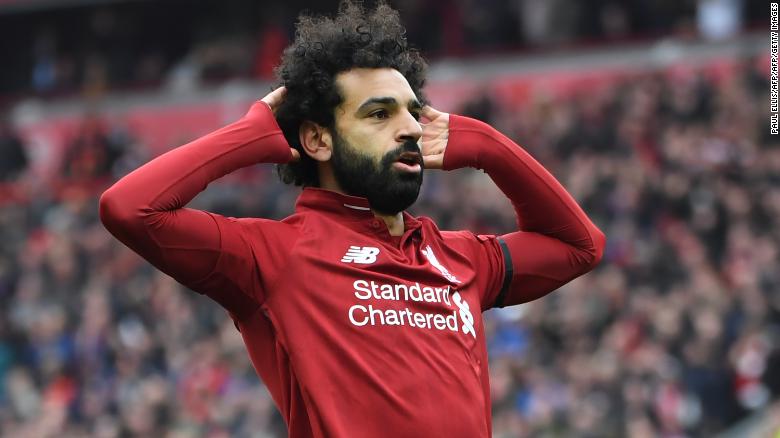 Mohamed Salah finished off the Liverpool v Manchester United match with a crushing final goal on Sunday. Following the sharp counter attack against his rivals, the Egyptian player flung away his jersey in celebration in front of the crowd at the Anfield faithful.

Dejan Lovren and Mohamed Salah have taken their bromance to a new level with a series of revealed Whatsapp messages posted to Instagram on Monday showing the Egyptian Liverpool star and the Croatian mocking each other over a celebratory shirtless picture of Salah after his game-ending goal against Manchester United.

The texts show Lovren congratulating his team-mate, writing "Bravo brate". In response Salah sends him an epic photo of his toned torso as he throws his teams shirt away after scoring a late goal in the Liverpool v Manchester game.

Lovren is confused by the picture and demands Saleh explain what he wanted to say only to be told it was only a mistake.

"What the writer wanted to say? That he is strong? Body fat? Muscles? Goal? Never mind, it was only a "mistake"", Lavron captioned the photo on Instagram congratulating the team for the win.

Lovren has a history of making fun of Salah's physique, with another reported Whatsapp exchange in September 2019 showed the Egyptian send an older photo of his shirtless body, also playing it off as a mistake.

Lovren mocked the photo saying that he was posing for the photographer.

Lovren and Salah have established a closed bond during their 2-and-a-half year time as Liverpool team-mates, wirth Lovren attrtibuting their "bromance" to Salah's signing with the club in summer 2017.

"We have been talking a lot, we were talking about private things and we have a similar background, a tough life from the beginning".

"It wasn't easy to grow up where he was in Egypt without anything, and I had a similar thing in Croatia with the war and going back to Germany", he explained.

"And then with his normality, how he can talk to you and when you see how he thinks... we are good friends, coffee, jokes!"

The spats on Whatsapp follow an intense start to the Premier League for the team, seeing the Reds continue undefeated with a 2-0 win over Manchester and putting them 16 points clear at the top.

Virgil van Dijk put them ahead with the first goal before Salah struck final hit right at the end, rounding off their victory.