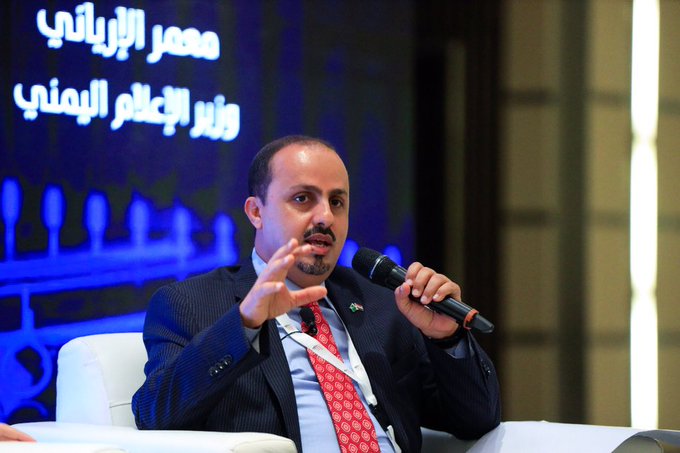 The Minister of Information in the Yemeni internationally recognized government Muammar Al-Aryani lied on Wednesday what the Ansar Allah group (Houthis) announced about its control of the Nehm district, east of Sana'a, and areas in Marib and Al-Jawf governorates.

He said they were "promoting false victories."

Al-Eryani said in a series of tweets on his Twitter account: "This position represents a clear declaration of the death of the political process and the insistence to continue attacking Saudi Arabia with ballistic missiles and drones."

Al-Eryani pointed out that "the statement came to cover up the failure of the Houthi militia to achieve the goals of its widespread military escalation in controlling the governorates of Marib and Al-Jawf after mobilizing thousands of its members.".

Al-Eryani said that the Ansar Allah group (Houthis) clashed with the steadfastness of the government forces and the people of those areas, which he described as "honorable people" who dropped their plans and suffered heavy human losses, the largest since 2015.

Al-Eryani pointed out that the statement "promotes false victories and aims to raise the morale of the Houthi militia and mobilize more deluded in its absurd battles."

The Ansar Allah group (Houthis) announced earlier this evening, Wednesday, the "completely liberation of the Nehm district east of Sanaa" in a military operation that the group called "Operation Bunyan Al-Marsous. ".

In addition to missile attacks on vital and strategic sites inside the Saudi depht.

In a statement, the military spokesman of the Ansar Allah group (Houthis) Yahya Saree revealed details of his group's response to what he described as "the great aggressive path that was targeting the capital, Sanaa."

Saree said that his group launched a counter attack on the internationally recognized Yemeni government forces, which led to "the liberation of all the areas of Nehm."