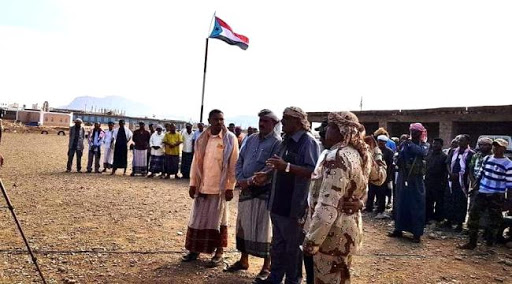 There appears to be a plan to dismantle the largest, most armed, and most qualified military brigade, located in the governorate of Socotra Archipelago, and is being implemented in steps, by declaring a military rebellion more than once in a short period.

And again on Thursday, a military battalion announced its rebellion against the (legitimate) Yemeni government inside the governorate of Socotra Archipelago and is raising the flags of separation.

Local sources told "Debriefer" on Thursday that "The 3rd Battalion of the brigade, the first marine infantry in the Governorate of Socotra Archipelago, declared its rebellion against the (legitimate) Yemeni government and raised separatist flags inside the brigade."

According to the sources, "military points were established on the Hadibo-Airport road, in which the brigade command is located, after the revolt of the third battalion, under the direction of the Chargé d'Affaires of Major General Nasser Qais."

The sources indicated that the commander of the third battalion, Abdullah Ahmad Daman Kanazher, had announced earlier that all members of the battalion had joined forces loyal to the UAE.

And Saudi mediation managed to contain a military rebellion announced by the Coast Guard battalion in Socotra in early February.

A local source confirmed that "the UAE recently provided the Special Forces camp with security pick-ups and personnel who were trained in Aden Governorate.

Socotra had witnessed numerous rebellions, including the announcement by members of the "Beach Guard Brigade" of the First Marine Brigade in the governorate in the beginning of February, rebellion against the legitimacy of President Abdrabbo Mansour Hadi and joining the forces of the Southern Transitional Council (STC) supported by the Emirates.

On October 8, a security official announced the end of the demonstrations of a UAE-backed security rebellion in Socotra, confirming that government forces had completed control of all camps and security centers in Socotra.