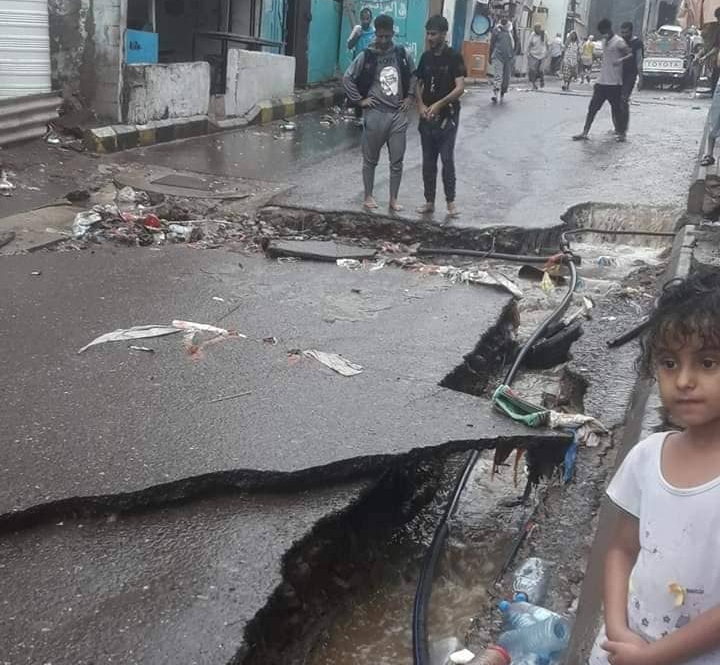 As the Yemeni interim capital sinking in floods, the Emirati-backed Southern Transitional Council (STC) has made use of the painful incident to criticize the official government.
STC chairman ordered support units and thunder force to participate in providing the needed assistance for Aden people, and to alleviate the damages caused by rainfalls seen by different districts of the interim capital, STC website said Tuesday.
Eidroos al-Zobaidi instructed "military and security units be deployed in streets to help stranded people, reopen roads affected by rain floods and help families whose homes and properties have been damaged," it added.
For his part, STC vice-chairman accused the official government of just watching the Yemeni interim capital while sinking.
"Aden is sinking and the legitimate [government] will remain passive while it has everything in hands," Hani bin Boraik added on Twitter.
"Yet, it will direct its viruses, on social media, to shift the responsibility for rescuing Aden to the STC, but this move will be faced by southern enthusiast pens.
"With the help of its cooperative supporters, the STC will save no effort to save Aden," the STC official said.
On Tuesday, the Yemeni President instructed authorities to take necessary actions to help people affected by floods in the southern port city of Aden.
"President Abd Rabbu Mansour Hadi ordered that relief aid be provided for people affected by floods in Aden, work of rescue and accommodation committees be activated, all losses be assessed, victims be consoled, and all resources be utilized to cope with this ordeal," the Riyadh-based Saba said.
Aden and most of southern provinces have been seeing heavy rainfalls, with great floods that gushing into streets and roads, leaving gross damages to private properties and homes.