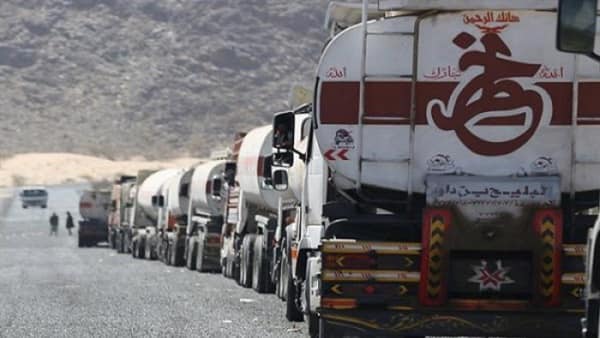 The Yemeni official government on Monday accused the Houthis of denying more than 150 oil lorries access to northern areas under the group's control.
"The Houthis are obstinately preventing more than 150 oil trucks from entering areas under their control, threatening traders and terrifying lorry drivers," the government-run economic committee added on Facebook.
This practice suggests that the group "blatantly persists with politically trading in people sufferings and boosting the black market they run.
"This denial comes after the government had exerted every effort and facilitated the transport of oil derivatives from liberated areas to subjugated areas so as to alleviate people suffering and curb black market," the committee said.
The oil on the lorries was legally imported to government-held seaports and is in compliance with specifications, all test controls and government decisions and regulations, it added, citing the "checklists issued by international companies".
On Sunday, the Houthi group said the trucks were held at crossings for incompliance with qualifications.
"There are desperate attempts to bring debased oil from occupied provinces in order to dump the market as part of aggressive plots," said director of the Houthi-run Yemen Petroleum Company.
These oil cargoes will not let in, Ammar al-Adhroi'e added, after "they were tested corrupted and invalid for machines."
Sixty oil lorries were stopped at Jawf mouth, 100 at Afar gateway in Baydha, 50 at Hodeida entrance and 50 others in Taiz, a Houthi-run TV reported on Friday.
The group accuses the Saudi-led coalition of detaining 420,000 tons of oil on 15 oil tankers off Hodeida ports in the Red Sea.