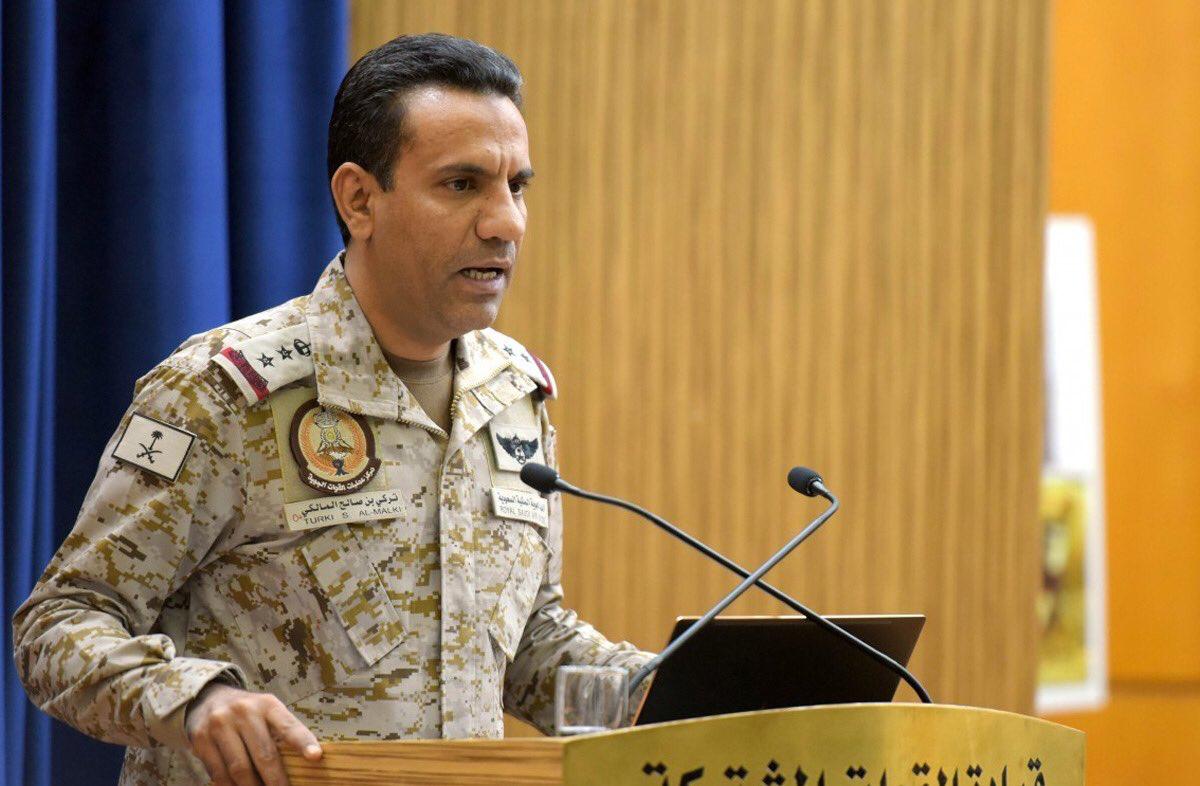 The Saudi-led Arab military coalition has threatened to cut off any hands that try to target Saudi Arabia in response to threats by the Houthi Group on Wednesday.
The Houthi Group, also known as Ansar Allah, threatened to launch harshest military operations against Saudi Arabia following around 64 Saudi-led airstrikes in regions under its control, including 25 airstrikes in the capital Sanaa.
Spokesperson for the coalition, Turki Al-Maliki, said in a press conference on Thursday: "We have launched a qualitative offensive in response to Houthi missile and drone attacks on Saudi Arabia".
He did not give more details about the offensive.
The coalition launched a series of powerful airstrikes on a number of Yemeni provinces which have been under control of the Houthis for six years.
Al-Maliki said the coalition had recently intercepted 8 explosive drones and four rockets the Houthis launched towards the Saudi kingdom, including an Iranian-made Qiam rocket which was launched towards Riyadh.
"Targeting civil facilities is a red line that will never allow to be crossed. We will cut the hands that try to target Saudi regions.
We will take strict measures against the Houthi militia if it tries to target populated areas in the kingdom," he said, according to Alarabiya TV.
Iran is providing the Houthis with qualitative missiles to undermine regional security, he said, accusing Tehran and the Houthis of violating the UN resolution which bans the supply of weapons to Yemen and the Iranian Revolutionary Guard of using smuggling networks to deliver weapons to the Houthis.
"The Houthi Group can't produce ballistic missiles and drones.
Weapons it is using have been made by Iran," he said, according to the TV.
He accused Iran of being a hub for smuggling weapons to the Houthi Group which in turn is spreading destruction, threatening the region and deliberately attacking civilians in Saudi Arabia.
4.276 Houthi breaches of the ceasefire have been registered in 45 days, he said, pointing out that the Yemeni army has committed to self-restraint during the same period.
"118 Houthi ballistic missiles have been intercepted by the Saudi air defences. The Houthis deliberately establish production workshops in residential areas.
The Al-Nahdayn Mountain is one of their ballistic missile storage depots," he added.
Regarding the Safer floating oil storage and offloading vessel, which is moored in the Red Sea north of the Yemeni western province of Hodeidah, Al-Maliki said the Houthis are using the vessel as a pressure instrument against the government of Yemen.
He accused the group of inflexibility and blocking maintenance of the vessel, holding it accountable for any crude spill from the floating terminal.
On Wednesday, prominent Houthi leader and member of the Houthi supreme political council, Mohammed Ali Al-Houthi, revealed that his group had sent a maintenance team to inspect the vessel.
But he did not say whether the team included UN experts or not.