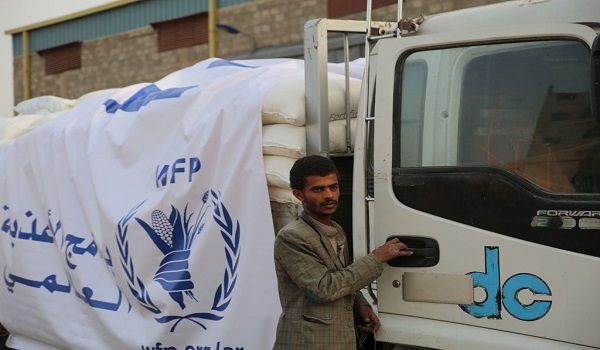 World Food Program Executive Director David Beasley on Wednesday said his unusual public criticism could backfire, with Houthi leaders providing even less access to humanitarian workers, but that children were dying as a result of this "desperate, desperate situation", BBC reported.

He said: "the agency's efforts to reach people in need were being repeatedly blocked."

He pointed out that "This violates the most fundamental international standards of humanitarian principles because innocent people are suffering from food diversion, theft, corruption,"

The World Food Program warned Monday that it may have to suspend the distribution of food aid in Houthi rebel-controlled areas in north of Yemen, over fears of "embezzlements" and diversion of aids from their actual recipients, as the group has said it disallowed entry of WFP wheat shipment for "containing insects".

The WFP director has sent a warning letter, seen by AFP, to head of the Houthi Supreme Political Council, Mahdi al-Mashat.

The 5-May dated letter was the second sent by David Beasley to Houthis, said WFP spokesman Monday in Geneva.

After the first letter inDecember, the WFP noticed some progress that has stopped in the few last weeks, but matters in some cases has further relapsed, the spokesman told AFP.

The WFP director called on Mashat to abide by deals, warning that, if the beneficiary-selection and thump system is not applied, the program would have no other option than suspending the distribution of food aid in Houthi rebel-controlled areas.

The WFP's humanitarian operation in Yemen is its largest in the world. Still, the program has said it is seeking to increasethe range of food aid for Yemen, to reach some 12 million people, or 40 percent of the country's population.

WFP director Beasley said then "after the Program learnt many people in the Houthi-controlled capital, Sana'a, have not been getting, its own investigation had found evidence of trucks illicitly removing food from designated food distribution center" in Houthi-controlled areas as well as fraud by a local food aid distributer connected to the Houthis' Education Ministry.

"These incidents of fraud amount to stealing food from the mouths of hungry Yemeni children," he added while "children are dying in Yemen because they do not have enough to eat.. It's a disgrace, criminal, it's wrong, and it needs to end."

On Sunday, Houthis said their quality-controlling authorities had refused the entry of some 8 tons of grinded wheat for non-compliance with standard specifications applied by the rebels.

Tests have shown insects contained in the flour,which wasdenied entry into the Red Sea port of Hodeida, according to the Sana'a-based Saba.