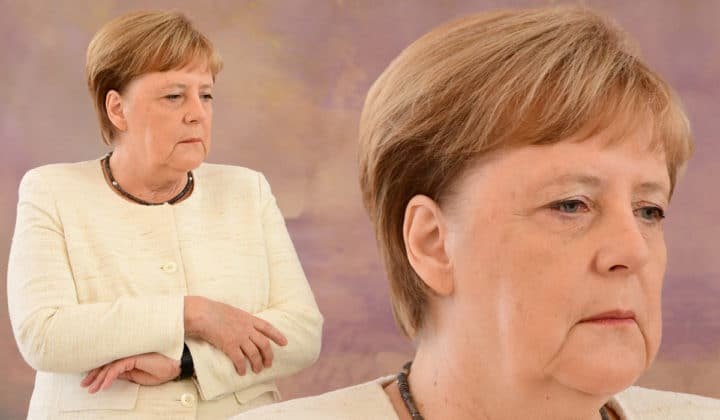 Global spy agencies are trying to get their hands on Angela Merkel's medical records in an effort to discover what caused her recent shaking episodes, it has been revealed.

Mrs Merkel, 64, kept a low profile as she attended the G20 summit in Osaka following the latest incident of tremors on Thursday.

Her office blamed dehydration for the first bout of tremors ten days earlier and said the second was psychological, caused by memories of the first.

According to Germany's Bild newspaper, however, several of the world's spy agencies are not convinced by the explanation and have started their own investigations into Mrs Merkel's condition.

As she touched down in Japan for the summit on Friday just 24 hours after the attack Mrs Merkel said she was sure that 'this reaction will disappear just as it has arisen'.

Asked whether she had visited a doctor and found out what the tremors were caused by the Chancellor said simply she had 'nothing in particular to report'.

Despite her insistence that she was fighting fit, however, Mrs Merkel appeared out of sorts at the summit in Osaka.

Her trip to the G20 included a long-distance flight and grueling negotiations with other world leaders - including Donald Trump.

The veteran politican shied away from confrontation with either Russia or the US and appeared at times to have been sidelined.

Merkel's latest health scare came just hours before she was due to board the plane for Japan, sparking new questions about her health.

The 64-year-old Chancellor's arms and body could be seen noticeably trembling as she met Germany's President Frank-Walter Steinmeier on Thursday.

For around two minutes, she continually folded her arms in an apparent attempt to stop her hands and body from violently juddering. Close-up footage showed the difficulty she was having trying to keep the quivering under control as she gripped her arms together.

It comes 10 days after she blamed dehydration for the shakes she suffered during a meeting with visiting Ukrainian President Volodymyr Zelenskiy.