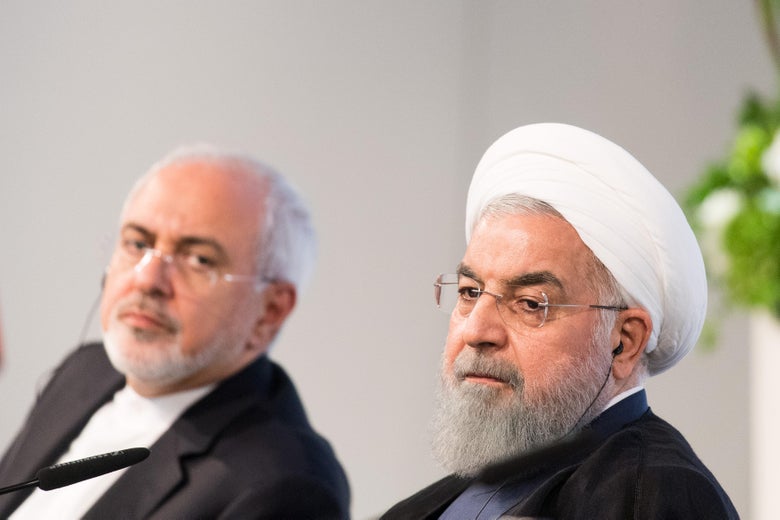 Iranian President Hassan Rouhani said on state television: “They (Americans) are resorting to childish behavior... They were claiming every day ‘We want to talk, with no preconditions’...and then they sanction (our) foreign minister,” Foreign Minister Mohammad Javad Zarif, a pivotal player in the nuclear deal who was educated and lived for years in the United States, dismissed the U.S. action and said it would not affect him as he had no property or other interests in America.

“A country which believes it’s powerful and a world superpower is afraid of our foreign minister’s interviews,” Rouhani said, alluding to numerous interviews that Zarif - a fluent English speaker - gave to American media when he visited New York for a United Nations conference in July.

“When Dr Zarif gives an interview in New York, ... they (Americans) say Iran’s foreign minister is misleading our public opinion,” Rouhani said. “What happened to your claims of liberty, freedom of expression and democracy?”

US Treasury Secretary Steven Mnuchin said Zarif was being sanctioned because he “implements the reckless agenda of Iran’s Supreme Leader...(We are) sending a clear message to the Iranian regime that its recent behavior is completely unacceptable”.

In a tweet earlier on Thursday, Zarif said peace and dialogue were an “existential threat” to hawkish politicians allied with U.S. President Donald Trump who take a hardline stance against the Islamic Republic.

Zarif has in the past said that a so-called “B-team” including Trump’s national security adviser John Bolton, an ardent Iran hawk, and conservative Israeli Prime Minister Benjamin Netanyahu could goad Trump into a war with Tehran.

In repudiating the nuclear deal reached by predecessor Barack Obama, Trump said he wanted to secure a wider accord that not only limited Iran’s nuclear activity but also curbed its ballistic missile program and reined in its support for powerful proxies in Syria, Iraq, Yemen and Lebanon.

Trump intensified sanctions in May to try to strangle Iran’s oil exports, the lynchpin of its economy.

The security of shipping in the Gulf, through which about a fifth of the world’s oil passes, has shot up the international agenda since May when Washington accused Iran of being behind explosions that holed six tankers over several weeks.

In July, Iran seized a British-flagged tanker in the Strait of Hormuz, the Gulf’s outlet to the open seas, in apparent retaliation for Britain’s seizure of an Iranian ship accused of violating European sanctions by taking oil to Syria.

Britain on Thursday ruled out a swap of the two tankers. “We are not going to barter: if people or nations have detained UK-flagged illegally then the rule of law and rule of international law must be upheld,” Foreign Secretary Dominic Raab said.

In a sign of increasing jitters over security in the Gulf, Royal Dutch Shell (RDSa.L) said on Thursday it was not taking any British-flagged tankers through the Strait of Hormuz for the time being.

The US Embassy in Berlin said on Tuesday the United States had asked Germany to join France and Britain in a mission to protect shipping transiting the strait and “combat Iranian aggression”. Germany rebuffed the request.

“To join the American position, which in our view is part of a strategy of maximum pressure, has never been the right path for us and will not be in the future,” Foreign Minister Heiko Maas told Germany’s ZDF television.

The foreign ministry of Russia, another party to the 2015 deal, said it had the impression the United States was seeking a pretext for conflict in the Gulf, RIA news agency reported.