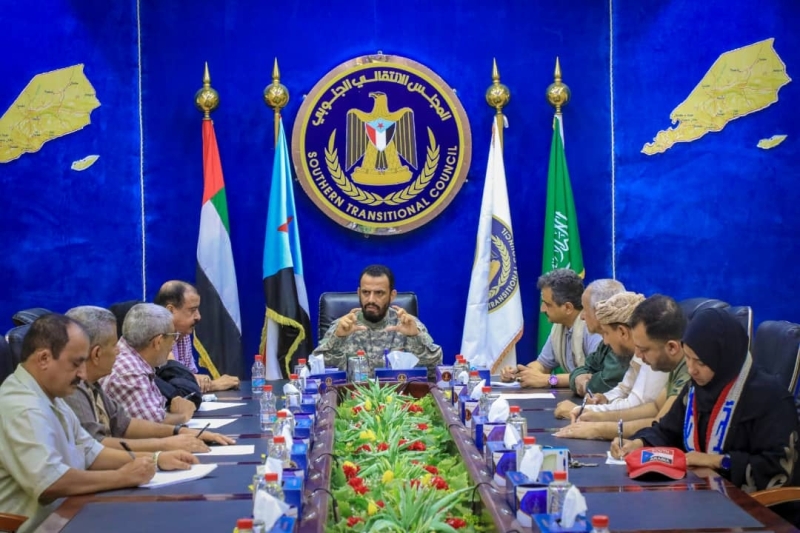 The Emirati-backed Southern Transitional Council (STC)is constant in partnership with the Saudi-led coalition against Houthi group, the council said Wednesday, calling for march on the Aden-based presidential palace to oust the Yemeni internationally-recognized government.

"We confirm constant partnership with the Saudi-Emirati Arab coalition in fighting and stopping the Persian Houthi expansionism in the region, and with the international community in combating terrorism," said the STC in a release after emergency meeting in Aden.

The separatist STC, however, reiterated calls for mobilization and march on the Ma'asheeq palace to overthrow the "government of terrorism and corruption loyal to the terrorist Islah Party."

As part of its conspiracy, the government has abandoned some fronts in northern areas bordering southern ones to allow for Houthi return and control over the south, the STC claimed.

On Wednesday, armed clashes erupted between the Emirati-backed STC forces and the Saudi-backed presidential guard in vicinity of the palace and outside Badr camp loyal to President Abd Rabbu Mansour Hadi.

A presidential guard commander said a fellow officer was killed and three troops injured in the clashes, which left five STC elements killed and scores wounded, according to pro-STC media reports.

STC vice-chairman has called the presidential guard troops to lay down their arms.

The Security Belt (SB) "southern forces will only confront the terrorists using the Ma'asheeq palace as hangout," Hani bin Boraik added on Twitter. As for "our southern brethren in the presidential guard, their blood is ours."

On Wednesday, the official interior minister said they "have stopped the rebellion in Aden, and the Saudi-Emirati-led coalition has confirmed for us their rejection to bin Boraik rebellion," calling on STC leaders to take a stance towards bin Boraik, and on Aden people to calm.

"Government forces have practiced patience and wisdom to maintain stability in Aden," Ahmed al-Maysari, also deputy premier, added. "We'll do our legitimate duty in protecting the state institutions in coordination with coalition."

Southern separatists have exploited Yemen's war to enhance their presence, backed by the United Arab Emirates.

The STC has local forces trained and armed by the United Arab Emirates, the key partner of Saudi Arabia in leading the Arab coalition. But such forces do not answer to the official government, make enemies of Muslim Brethren and other Islamic groups, and controls many southern cities and districts.

The UAE-supported STC was established in May 2017 and consists of Yemeni southern bodies calling for separation from the north and restoration of south state that existed before Yemeni Unification in 1990.