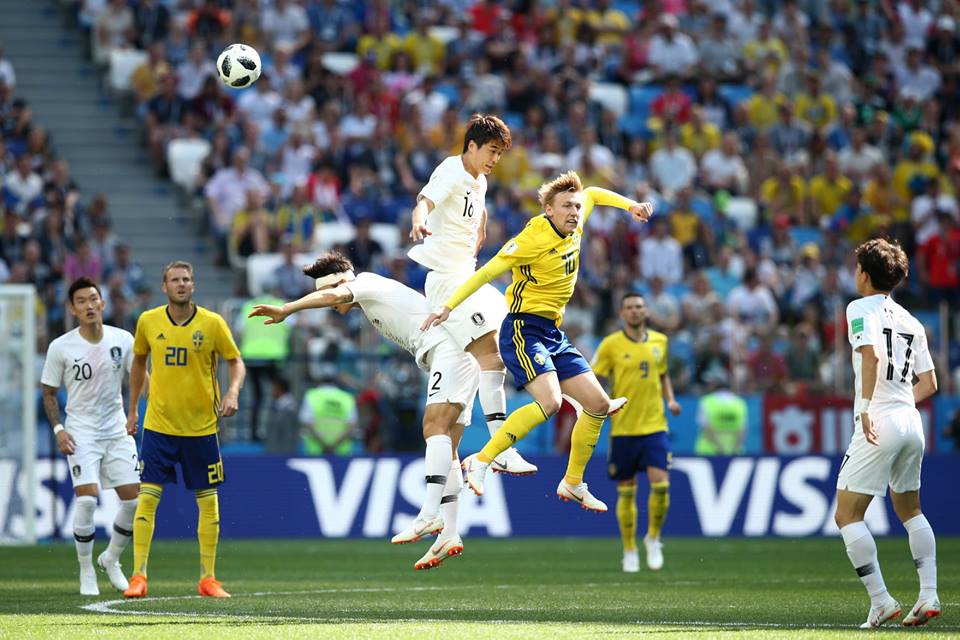 Sweden needed a second-half penalty, given after a VAR consultation, to edge past South Korea and move joint top of Group F.
Andreas Granqvist's VAR-assisted penalty handed Sweden a deserved 1-0 World Cup win over South Korea at the Nizhny Novgorod Stadium on Monday.

The win takes Janne Andersson's side joint top in Group F with Mexico after their shock win over reigning champions Germany.

The European side were dominant throughout and were twice denied by goalkeeper Cho Hyun-woo before another dramatic intervention by VAR shortly after the hour.

Substitute Kim Min-woo appeared to have hacked down Viktor Claesson, and, after initially waving away furious appeals from Swedish players, referee Joel Aguilar consulted VAR and eventually pointed to the spot.

South Korea were disappointing throughout, with star man Son Heung-min unable to demonstrate any of the threat that has made him a firm favourite with Tottenham fans in recent seasons.

Sweden now have the chance to all but knock Germany out of the tournament on Saturday, while South Korea face Mexico desperately needing a win to maintain their hopes of qualifying for the knock-out stages.

Sweden started without Victor Lindelof after the Manchester United defender fell ill overnight, with his replacement Pontus Jansson and the rest of the defence scarcely tested by a tepid South Korean attack in the early stages.

Granqvist was denied a shot at goal by a superb last-ditch interception by Kim Young-gwon in the game's first notable moment before Marcus Berg squandered a golden opportunity to hand his side the lead midway through the half.

The Al Ain striker ghosted in at the back post to meet Ola Toivonen's low ball, but his effort was too close to Cho Hyun-woo, who kept it out with his leg and then punched away the loose ball.

The all-action Kim was in the thick of the action again soon after, throwing himself in front of Berg's scuffed effort from a corner, while Claesson saw a header deflected narrowly over on the stroke of half-time.

In a bright start to the second half, both sides exchanged chances within the first six minutes.

First, Emil Forsberg flashed a shot over after a flowing counter-attack before Koo Ja-cheol sent a header into Robin Olsen's side netting as South Korea belatedly woke from their slumber.

A teasing free-kick from Sebastian Larsson was met by the head of Toivonen soon after, but once again it was too close to Cho, who was able to parry away.

Sweden then got the breakthrough their positive approach deserved after Kim's clumsy challenge on Claesson. A surprising choice to take the spot-kick, Granqvist coolly slotted into the bottom corner for his seventh international goal.

Hwang Hee-chan spurned a glorious opportunity late on, heading wide from 10 yards out, as Sweden ultimately held on for a precious three points.