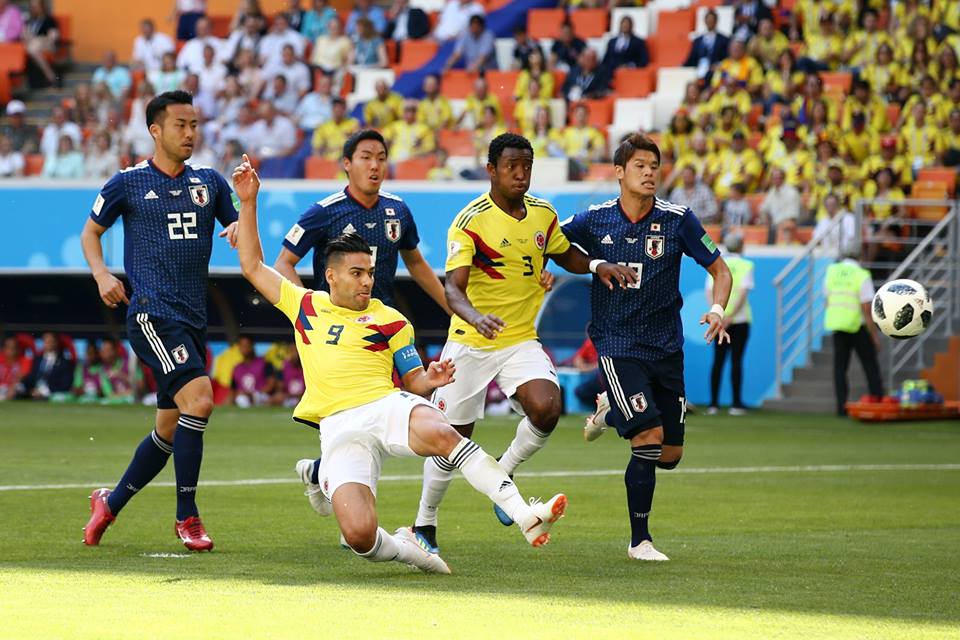 The Group H favourites suffered a nightmarish start to their campaign when Sanchez blocked Shinji Kagawa's shot with his arm after just two minutes and 56 seconds, prompting the referee to brandish the first straight red card for handball at a World Cup since Luis Suarez was sent off against Ghana in 2010.

Kagawa then put Japan ahead from the penalty spot but even with 10 men Jose Pekerman was able to make his side competitive and Juan Quintero levelled with a free-kick six minutes before half-time.

Pekerman brought on 2014 World Cup Golden Boot winner James Rodriguez in the second half but the Bayern Munich star, not fully recovered from a calf injury, was not allowed much of the ball by a disciplined, energetic Japan side.

Akira Nishino's men came into the tournament as one of the lowest ranked teams but they defied their position by making good use of their man advantage and fully deserved to have their lead restored when FC Koln forward Yuya Osako headed the winner in the 73rd minute.

Victory over Colombia will give Japan hope of progressing beyond the group stage for the first time since 2010, while Pekerman will hope that James can return to full fitness in time for their forthcoming clash with Poland.

OptaJoeThe game was less than three minutes old when Sanchez blocked Kagawa's yard shot with his arm and the referee pointed to the penalty spot before showing the midfielder a straight red card.

After lengthy protests, Sanchez eventually left the field and Kagawa was allowed to slot the penalty clinically into the bottom right corner of the net and Colombia's game plan was in tatters.

Despite the double setback, the South Americans attacked and Radamel Falcao got a toe to Juan Quintero's looping pass into the penalty area but could only poke the ball into the arms of veteran Japan goalkeeper Eiji Kawashima.

Falcao won a dubious free-kick after a challenge with Makoto Hasebe and Quintero's ensuing free-kick was driven low into the bottom left corner of the net where Kawashima arrived just too late to stop it from crossing the line.

After a frantic first half, the game slowed in the second but Osako burst into the Colombia box and drew a save from David Ospina with a tricky close-range shot that the Arsenal goalkeeper parried away.

Ospina was called into action again moments later, diving full length to his left to push Takashi Inui's curling 20-yard shot away from danger, before Pekerman sent on James as he sought a way to turn the tide back in favour of his side.

But Japan were dominating possession and their pressure told when substitute Keisuke Honda's corner found Osako, who outjumped his marker and headed the ball into the far corner of the net, beyond Ospina's reach.

James had a sight of goal with 13 minutes remaining but his first-time shot from inside the penalty area was turned over the crossbar by the outstretched leg of Osako, and he will hope to regain full fitness in time to inspire Colombia to better results against Poland and Senegal.

- Japan have become the first Asian side to defeat South American opposition at the World Cup (P18 W1 D3 L14).
- This is the first World Cup tournament in which as many as four South American teams have failed to win their opening game since 1974.
- None of Colombia's 19 games at the World Cup have ended goalless. The only nations that have played more games in the competition without recording a 0-0 are USA (33) and Austria (29).
- Keisuke Honda is the first player from an Asian nation to provide an assist in three different World Cup tournaments since 1966.
- There have been more direct free-kick goals scored in just 15 games at World Cup 2018 (4) than there were in the entire 2014 edition (3), with Colombia’s Juan Quintero netting the fourth.
- Quintero became the first player to score in two different World Cup tournaments for Colombia (2014 and 2018).
- Eiji Kawashima (35 years, 91 days) became the oldest player to appear for Japan in a World Cup finals match.