Yemeni gov.t calls on UN to resolve "Hodeida file and management of its ports" 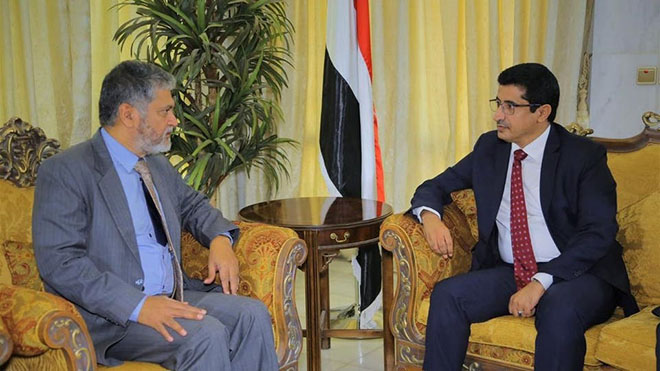 Yemeni Foreign Ministry Undersecretary for Political Affairs, Mansour Bagash, during his meeting today in Riyadh, Saudi Arabia, called on the Indian General Abhijit Guha, the new head of the Redeployment Coordinating Committee and Head of the United Nations Mission to Support of the Implementation of the Hodeida Agreement in Western Yemen to carry out their responsibilities to pressure Ansar Allah (Houthis) to abide by what has been agreed and strengthen the tripartite control mechanism. "

The undersecretary of the internationally recognized Yemeni Interior Ministry called on the United Nations and its mission to "resolve the issue of local security forces responsible for managing the security of ports and the city of Hodeida, in accordance with Yemeni law, to ensure that the Houthis exploit these ports to smuggle weapons and finance and prolong the war."

According to Aden-based Saba news Agency, Bagash discussed the efforts of the legitimate government to stabilize the ceasefire in Hodeida and its keenness to alleviate the suffering of citizens and its adherence to the implementation of the agreement in accordance with the Stockholm understandings.

For his part, Head of UN Mission to Support the Hodeida Agreement (UNMHA), expressed his aspiration to prevent all forms of escalation in Hodeidah and achieve tangible progress in the implementation of the two phases of the agreement during the next phase.

The newly-appointed Indian General Abhijit Guha will later set the date for his RCC first meeting, the Saudi Asharq Al-awsat paper quoted a source at the Yemeni government as saying.

On 12 September, the UN Secretary-General Antonio Guterres appointed Guha to lead the RCC and UNYOM in the Yemeni western port city.

Guha is the third general appointed as chairman of the UN mission, after the Dutch General Patrick Cammaert (who resigned last January) and the Danish General Lollesgaard (who took the post for six months).

The RCC includes six servicemen from each of warring parties (the Yemeni official government and Houthi group) as members in a mission tasked with monitoring rivals' compliance with Stockholm Agreement on Hodeida ceasefire and redeployment.

On 9 September, the RCC said a joint operation (JO) center had been established and operated, with liaison and coordination officers from both warring parties and from the UN included in the new center.

The JO center will work – from the UN mission office – on monitoring the Hodeida ceasefire, the RCC added.

At a meeting chaired by acting chairman Hani Nakhla, the RCC members decided to deploy monitoring teams in four posts at Hodeida frontlines, as a first step to stabilize ceasefire and end suffering and casualties among civilians, according to the RCC.

But those teams have yet to commence their duties.

Local authority, security forces and revenues of Hodeida ports are the main points stalling any progress towards the pact application.

But none of this has taken  so far, with both sides trading blames for trying to thwart the deal.