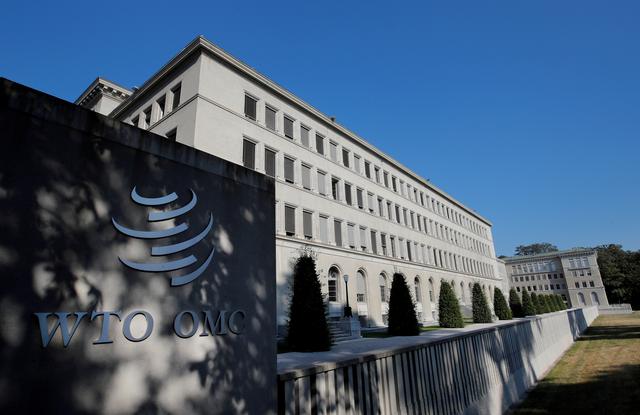 Reuters News agency said that US President Donald Trump has upended the global trade order with a slew of tariffs on economic rivals: now, Washington has redoubled its efforts to paralyze the very body designed to settle such disputes.

The World Trade Organization’s (WTO) Appellate Body may not make headlines like the US-China tariff war, but trade experts say its likely demise next month is a further move away from multilateral rules designed to promote global free trade and towards a ‘law of the jungle’ where might is right, according Reuters.

For two years the Trump administration has been blocking appointments to the top body that rules on trade disputes, which means it will soon have too few members to function at all.

Washington has now increased pressure, questioning the WTO budget. Trade officials told Reuters this raised a risk that the Geneva-based body’s biggest paymaster would block its funding, accelerating the end of its ability to resolve disputes.

The US Trade Representative’s office did not respond to questions about the budget.

Washington argues that the Appellate Body has flouted clear rules and morphed into something else while other WTO members have just stood by.

About 70% of initial WTO rulings are sent for review by a three-person panel of the Appellate Body, making it central to binding settlements of international disputes.

But Washington’s blocking action has reduced a pool of seven adjudicators to just three, the minimum required to sit on a case. When two of those three reach the end of their terms on Dec. 10, the Appellate Body will cease to function.

At a monthly gathering of the 164 WTO member states on Friday, Mexico, representing a group of 118 countries, will again call for the vacancies to be filled, but Washington is expected to maintain its veto. As the WTO relies on a consensus, it takes just one objection to block a proposal.

STEPPING INTO THE VOID?

The WTO has delivered more than 350 rulings over the past 25 years, but arguably has greater importance today.

WTO adjudicators are facing weighty decisions on the US-China tariff tussle, on metal duties imposed by Trump since 2018 and on conflicts between Japan and South Korea and between Qatar and its neighbors.

However, those decisions may carry no legal weight because of US steps to disable the appeals process. In a future with no functioning Appellate Body, any party unhappy with an initial ruling could simply file an appeal into a void.

Taking away binding settlement, said a European Commission official, was “almost a license to start misbehaving”.

Washington complains that the Appellate Body regularly exceeds a 90-day limit to give rulings and goes beyond the remit of a case effectively to set new rules.

If a major US goal for its blocking strategy was to win the attention of other WTO members, it has worked.

A large group of other WTO members has broadly accepted the complaints and proposed a clarification of the rules, but the United States says this is not enough.

“It is imperative for members to engage in a discussion on how we have come to this point,” US Ambassador to the WTO, Dennis Shea, told peers last month.

The United States, the largest WTO plaintiff and defendant, has registered big wins, but has tended to focus on its losses, chiefly those limiting its right to counter what it sees as dumped or unfairly subsidized imports.

“Would we have the current crisis of the WTO dispute settlement system if the Appellate Body had ruled on trade remedies the way the United States wanted? I don’t think so,” said Van den Bossche.

Roberto Zapata, former Mexican ambassador to the WTO, says a deeper US concern relates to a perception that the WTO is not fully equipped to deal with emerging players, notably China and economies controlled by the state more than market forces.

Quite what happens on Dec. 11, when the terms of Appellate Body chair Ujal Bhatia of India and Thomas Graham of the United States end, is not clear. WTO rules allow them to stay on for cases to which they have been assigned, which would be about 10, but there is talk that Graham will not stay beyond December.

A U.S. budget block could also result in an abrupt end.

The European Union has forged agreements with Canada and Norway to allow appeals to go before former Appellate Body members, which is allowed under WTO rules, and is hoping other countries will come on board as Dec. 11 nears.

However, the United States has said the WTO budget and resources should not be made available for this. If Washington gets its way, Van den Bossche said, the EU’s interim solution will be “dead in the water”.