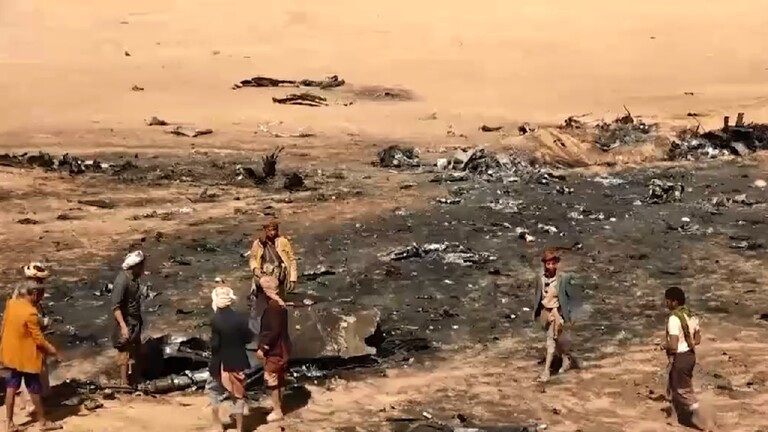 An independent international organization has called for an immediate investigation into civilian casualties hit by a coalition airstrike on the Yemeni northern governorate of Jawf.
The incident is a new violation of war rules and international humanitarian law, the Euro-Mediterranean Human Rights Monitor said.
"An immediate investigation must be opened into the raid on Al-Jawf governorate that took place shortly after the announcement of shooting down a coalition's warplane," the Geneva-based watchdog added in a statement.
"This indiscriminate violence against civilians appears to be an act of blind revenge without the slightest regard to the principles or rules of war, especially the principles of distinction and proportionality.
"Euro-Med Monitor warned against the indiscriminate targeting tactic used as a tool of revenge when a party to the conflict suffers military losses. The victims of such approach are usually civilians, which constitutes a grave breach of international humanitarian law, it added"
"Under the laws of war, the parties must do everything necessary to verify that the targets are valid military objects, and to stop any indiscriminate attacks that are expected to cause disproportionate civilian casualties."
"The continuing reality of the absence on international accountability currently prevailing in Yemen encourages parties to the conflict to commit more crimes," the Monitor warned.
On Saturday, the Houthi group accused the Saudi-led coalition of launching "reprisal airstrikes," leaving 30 civilians killed and others injured.
Initial field reports say 31 civilians have been killed and 12 others injured by airstrikes on al-Haijjah in al-Masloub district of Jawf, according to a UN statement.
The strike came hours after the Houthis said their air defenses had shot down a coalition Tornado fighter in the area.